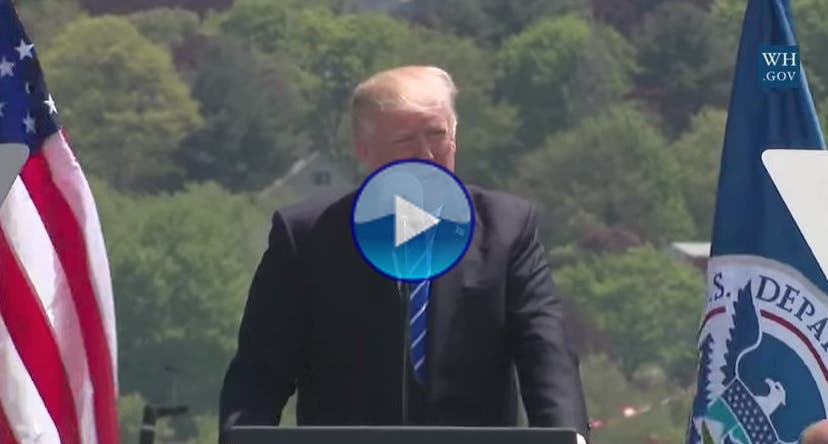 An embattled President Trump arrived at the U.S. Coast Guard Academy earlier today and gave the commencement speech for this year’s graduating class of cadets.

Once again, he proved to the nation that he is incapable of attending any event without making it about himself, launching into his usual playlist campaign hits (build the wall! Second Amendment! Saving money on the F-35! Tax cuts!) before deviating into an extremely uncomfortable tantrum about how the media isn’t “treating him fairly” and that he doesn’t deserve any of the criticism that the nation is heaping upon him.

This is what President Trump told U.S. Coast Guard Academy graduates in a commencement address pic.twitter.com/HDHnmi0Ufs

The grads were none too pleased to be subjected to the presidential pity party.

One friend/relative on bus line after ceremony complaining that potus was supposed to make the grads feel good. "Not tell us how he feels."

Trump’s atrocious behavior and inability to control himself are just further proof that the narcissistic patrician is entirely unqualified to be President.

If he’s this upset now, he is in for a very nasty surprise once indictments are issued and impeachment proceedings begin. Yesterday’s bombshell revelation that Trump attempted to obstruct the FBI’s investigation into his disgraced National Security Advisor, Gen. Michael Flynn is the beginning of the end.

For those who enjoy a hearty helping of schadenfreude, you’re in luck. Over the next few weeks, we will be able to watch the smug arrogance of Donald Trump turn to bitter anguish. It will be glorious.