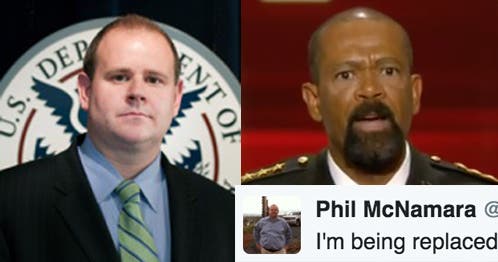 This afternoon, Sheriff David Clarke announced that President Trump had appointed him to the post of Assistant Secretary for Intergovernmental Affairs at the U.S. Department of Homeland Security (DHS). Clarke has been a lightning rod for criticism for making a wide array of fascist statements, causing the deaths of inmates, and framing victims for crimes.

Phil McNamara, President Obama’s appointee who currently holds the post, let loose on Twitter with a chilling warning about the dangers of Clarke in his job.

McNamara’s tweets should be read in their entirety. They show Clarke’s lack of fitness for the appointment and shed light on the threat of having someone as deranged as Trump in a position to make these vital hiring decisions.

So much for Sheriff Clarke's ability to work with #Democratic governors and mayors, he is too polarizing and calls critics #snowflakes

The job is massive, the issues are complex and nuanced, and requires political tact and ability to build relationships, he can't do that

I guess he's getting out of Milwaukee before the voters fire him. In recent polling 62% of votes disapproved of his job as #sheriff

I feel bad for my career staff @DHSgov, also bad for groups like @NatlGovsAssoc @usmayors, will he really be their #advocate inside DHS?