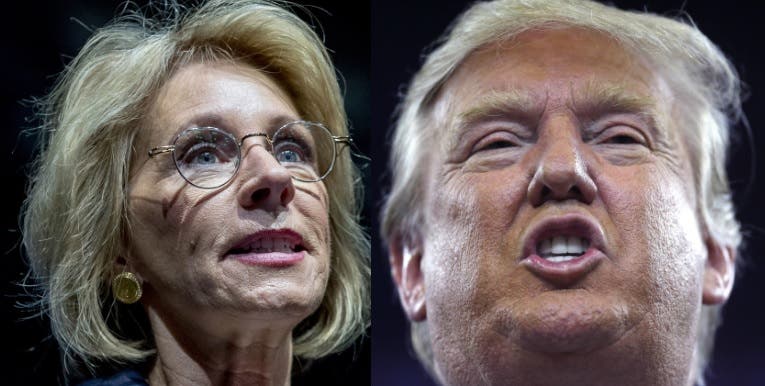 The Washington Post has obtained the details of President Trump and Secretary of Education Betsy DeVos’ first education budget proposal, and it spells disaster for our children’s future.

The pair of billionaires are planning to gut the education budget by $9.2 billion dollars – 13.6% of the entire department’s funding – and reduce total federal education expenditures by $10.6 billion.

Charter school crusader and religious extremist Betsy DeVos, who has pledged to use her position to “advance God’s Kingdom,” has budgeted $400 million for school “choice” vouchers and another $1 billion to “push public schools to adopt choice-friendly policies.”

School “choice” programs originally began as a way for racists to get around desegregation rules in the South, as governors closed public schools and allowed white parents to send their kids to whites-only academies while black children were left with no schools.

There is only one federally funded school choice voucher program, in Washington D.C., and a recent Department of Education analysis found that the students in those charter schools performed worse on testing than children who attended public schools.

His plan would also end loan forgiveness for 552,931 people for public servants in rural areas.

The United States remains far behind many industrialized nations in academic achievement. Our schools need more funding, not less. Our public school system could use reform, yes, but from skilled educators with decades of experience managing education systems – not an enormously incompetent ideologue like DeVos, whose sole achievement is her role in the Detroit charter school program, which is considered “the biggest school reform disaster in the country.”

The children of America cannot afford to let an unqualified religious zealot upend the public school system so she can achieve her lifelong dream of turning America’s schools into Christian sharia camps. The future of our nation depends on it.