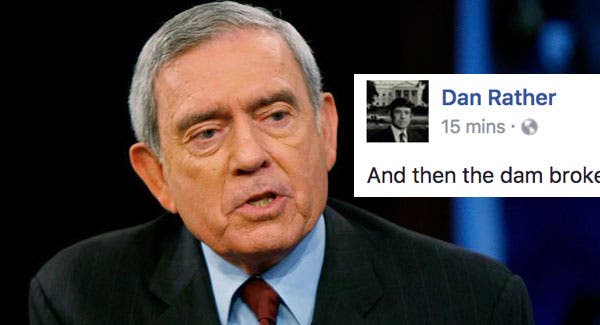 Stunning news just broke that the Deputy Attorney General has appointed a special counsel to oversee the Russian probe. Dan Rather, as eloquent a commentator as we have in these surreal times, immediately took to Facebook to post his thoughts on the development:

“And then the dam broke.

A flood is coming that will shape the future of our Republic in ways no one can predict. Except that the speed with which this has all happened, just over a hundred days into President Donald Trump’s dumpster fire of an administration, means it was all very predictable. And no one who played a role in normalizing this President should be allowed to forget it.

We have news that the Department of Justice, under Deputy Attorney General Rod Rosenstein, will appoint a special a Special Counsel to investigate the Russia interference scandal. Apparently, the President was only given a 30 minute heads up, and it came while he was interviewing new heads for the FBI. The Special Counsel will be former FBI Director Robert Mueller. These types of investigations tend to stir up more dirt than anyone thought was there. We will see if that happens now.

The stock market plummets. The White House staff is in chaos. The chorus of Republicans suddenly eager to be on the right side of history gets louder. Most of the time Washington moves in slow motion – except when it doesn’t. And this moment is one of those times. We are living in a news cycle that can be measured in nanoseconds.

And amidst the news, another blockbuster report by the Washington Post. House Majority Leader Kevin McCarthy apparently said last June that he thought Putin pays Trump. At which point Speaker of the House Paul Ryan, who was also there, stopped the conversation and swore those who were present to secrecy. When the Post asked about the incident, spokesmen for both representatives denied the story on the record. When they were informed that the Post reporters had heard a tape of the exchange, they changed their tune – saying it was a joke.

What all this makes clear is that the concerns which now threaten the integrity of our government were well known and played for cynical  theater. Well the curtain may be coming down on this act of this tragedy. New actors wait to take the stage for a drama for which the script is yet to be written.”

Rather – a veteran reporter on numerous administrations – offers a unique perspective on the events unfolding right now in America. Momentous history is occurring, and we are all witness to it.