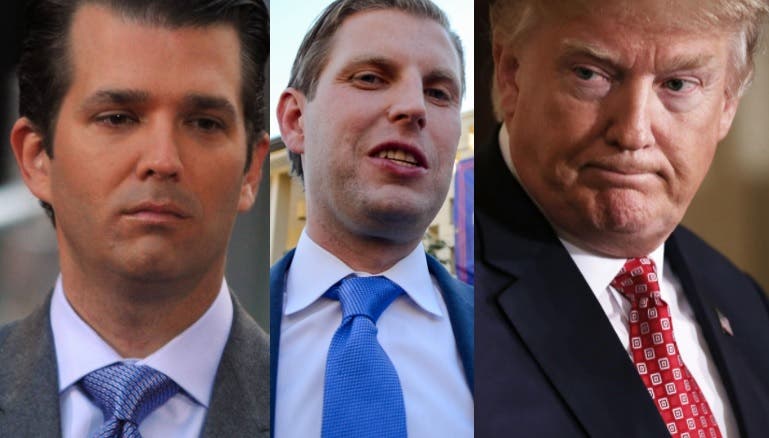 That includes the president’s adult sons, Donald Trump Jr. and Eric Trump., who are ostensibly in charge of the company while their dad is President.

It points to the president’s pledge at the time of his inauguration to put all of his assets into a trust in light of the “unprecedented issues his financial holdings” raise concerning conflicts of interest and the emoluments clauses, which are supposed insure complete separation of his business interests from his new position but have not done so in reality.

“Subsequent reports indicate that he has failed to take proper actions to ensure he is not in violation of the Constitution,” charges the letter.

As a result, money is being made that goes to the president that should not flow to him under the terms of the trust agreement he promised would govern his tenure in the White House.

“This continuing financial relationship,” says the letter,  “raises serious concerns about whether the Trump Organization is effectively a pass-through for income that violates the Constitution’s two Emolument clauses.”

They also note that Eric Trump has made recent comments revealing that he gives his father business updates every quarter, if not more often. That would seem to indicate the president is still actively helping run the businesses.

They also question an arrangement with the trust that allows the president to take “net income or principle” from his trust at will. This again would appear to violate the promise not to be active in the business:

“It defies common sense to believe that this type of arrangement resolves the President’s conflicts of interest,” says the letter. “It also raises serious questions regarding how such an arrangement could credibly insulate the President from unending Emoluments Clause violations.”

The letter requests a complete accounting of all federal funds paid to Trump Organization properties including Trump Tower, various golf clubs, and Mar-a-Lago. They also want to know the estimated value of the 38 Chinese trademarks recently registered there, and 157 other trademark applications pending in 36 countries.

The letter also lists seven other areas, along with sub-areas, where they want detailed financial and business information.

Among a number of sources, the letter cites a March 22nd article by Forbes with the headline, “Trump’s Vegas Partner Says Business Is Not Dividing Profits From Foreign Governments As Promised.” It reports that the President may still be receiving profits from foreign officials who stay at his Las Vegas hotel.

“Our democratic institutions derive legitimacy and public confidence through transparency,” states the letter.  “It is essential for the Ameican people to know that the President’s decisions are not affected by his personal financial interests.”

The letter is a request but unfortunately does not have the force of law. Since these are all Democrats making the request, and the Republicans control Congress, they do not have the authority to subpoena this information as important as it is for the American people to know.

No president in modern times has been so cavalier about making sure there is a separation of personal and business affairs from his government duties. Trump, it appears has not kept his promises to maintain the separation that good ethics and the Constitution require.

Trump and his family continue to profit off his business interests because he is president which by definition means there are improper conflicts of interest. It will be interesting to see how the Trump Organization responds because we know the president is not going to fix this unsavory situation.