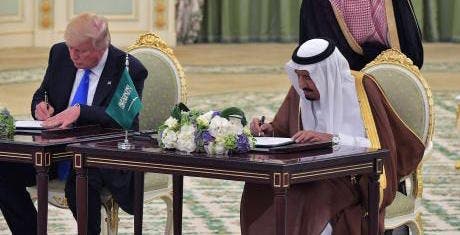 Immediately upon arriving in Saudi Arabia, Trump signed an arms deal worth $110 billion, in addition to over $350 billion over the next 10 years.

Per NBC News, “[t]he White House trumpeted the agreement as a “significant expansion” of the two nation’s “security relationship” that includes promises for future defense capabilities to support Saudi Arabia’s defense needs.” The White House’s verbiage, of course, is a thinly-veiled attempt to disguise what is nothing more than an arms deal between the United States and the ultraconservative kingdom of Saudi Arabia, the country from which 15 of the 19 September 11th hijackers came.

Today’s arms deal is the latest signal of Trump’s complete reversal from his rhetoric on the campaign trail. The fact that he is so quick to sell weapons to the country he once decried as wanting “women as slaves and to kill gays” and being “people that push gays off buildings” is evidence that Trump will forego any ethical principles for money.

While Trump may try to pass this deal off as a victory for the American worker, he will, in actuality, only enrich the already bloated defense industry, which may see its resources balloon if Trump’s $54 billion proposed increase takes effect. It is ironic that, while Trump touts an “America First” ideology, his administration is pushing health care reform to take health insurance away from 24 million Americans, while reallocating funding to a defense budget that is already higher than the next seven countries combined.

Trump can try to spin his economic mismanagement any way he wants, but the millions of Americans that will continue to suffer at the hands of his dismal presidency will speak louder than words.