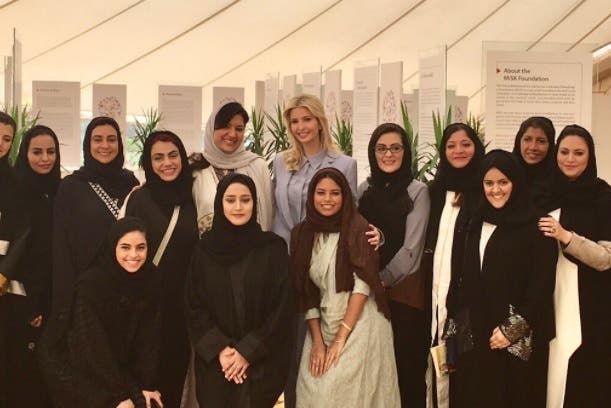 Trump Just Made A Serious Mistake In His Islam Speech, And His Excuse Is Pathetic

Ivanka Trump, a purveyor of toxic ersatz feminism and empty platitudes of women’s empowerment (for $29.99, of course), gave a speech today at Riyadh’s Tuwaiq Palace in which she praised the “progress” that the notoriously repressive and patriarchal Kingdom of Saudi Arabia had made towards giving women the rights they deserve.

Of course, no female reporters were allowed to stay for the event.

The austere hyperconservatism of Wahhabi Sunni Islam, the dominant religion of Saudi Arabia, dictates that Saudi women cannot go anywhere or do anything without the permission of a guardian – usually their father or their husband. They cannot drive a car; they cannot wear clothes other than the abaya; they cannot interact with men who are not their husband.

The victims of sexual assault are punished merely for speaking out; for instance, a 23-year-old unmarried woman was gang-raped by five men, became pregnant, and was sentenced to a year in prison and 100 lashes for “adultery.”

When their prison terms are up, many women are forced to remain in jail indefinitely because their guardians won’t come to get them, since the men now believe they have brought shame on the family.

Life as a woman in Saudi Arabia is a modern day Handmaid’s Tale, and so it was very disquieting to many to hear Ivanka Trump, who was born into obscene wealth and has never known any kind of oppression in her life, congratulate the Saudis for taking the progressive steps of allowing women to vote in municipal elections that are merely for show in one of the world’s last hereditary monarchies.

Aziza al-Yousef noted that “All the women that Ivanka Trump met have a guardian. “All these achievements depend on whether you’re lucky to be born in a family where your guardian will be understanding, will help you. If Ivanka is interested in women empowerment and human rights, she should see activists, and not just officials.”

Activist Loujain al-Hathloul, who has been jailed for daring to drive a car by herself, cut right to the heart of the matter.

“My issue with these events. is that they show these women as powerful and making an impact, making a change. But in real life, they’ve been given these opportunities by the men. They did not fight for them. We are fighting to abolish the guardianship system. Have they taken part in it…what are they doing in real life to change the laws that are restricting women from actually developing themselves?”

The answer, for Ivanka, is nothing. As the daughter for whom President Trump shows an extremely uncomfortable affection for, she is in a unique position to effect real change for women in the United States and around the world.

But what has she done?

What she has done is accept $100 million from the misogynist Saudis for her World Bank “women’s empowerment” fund and wrote a book that combines a shoddily curated assortment of motivational quotes with astonishingly tone-deaf tips for women with a full staff of household help but who just can’t find the time for a massage every day.

It is the height of hypocrisy for Ivanka to accept millions of dollars from Saudi Arabian sheikhs while pretending to care about the rights of women in a country where they are literally treated like chattel, on behalf of her sexual predator father who once referred to her as a “piece of ass.”