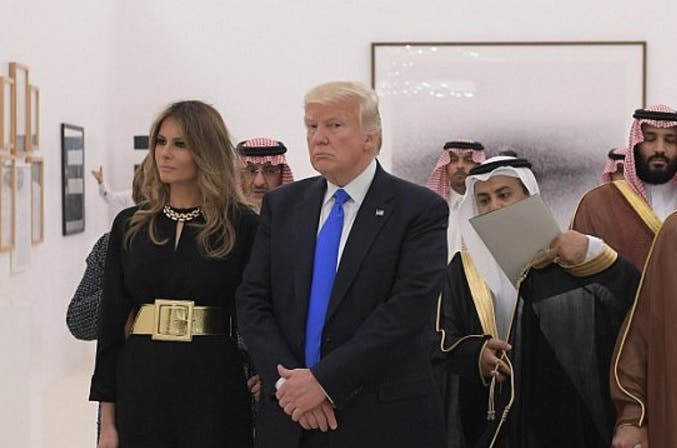 The difference is not an unimportant one, referring to terrorism as a product of Islam as a religion instead of a political ideology that ironically was created in and is exported by the Kingdom of Saudi Arabia.

Trump's use of term "Islamic terror" during speech deviated from prepared remarks which read "Islamist." pic.twitter.com/ISIRVZkmNc

When pressed on to why he made this change, CNN Senior White House Correspondent Jim Acosta was told it was because Trump is “exhausted.”

Which may be why the President’s motorcade made an unscheduled stop back at Trump’s hotel earlier this morning:

WH press pool in Riyadh reports confusion after Potus returns to hotel instead of going as planned to see center for moderate islam pic.twitter.com/O08Lbge0ps

It goes without saying that Trump’s apparent exhaustion a mere two days into a nine-day international trip is extremely disturbing and honestly quite pathetic.

Trump spent a significant part of the presidential campaign attacking former Secretary of State Hillary Clinton for lacking the “stamina” needed to be President, but it’s clear that overgrown toddler Trump himself cannot cope with any kind of physical stress or change in his routine.

As Jason Easley noted at POLITICUS, as Secretary of State, Clinton spent 401 days traveling to 112 different nations. Trump is already collapsing after just two days on his very first trip, and the “exhaustion” has already made him commit a very serious faux-pas.

As he prepares to travel to visit an ally he recently offended by giving away their top secret intelligence to the Russians, the room for error is very small. Our nation cannot risk an international incident just because the President needs a nap.

The number of ways Trump is unfit to be President is a very lengthy list, but “physically” is definitely near the top.