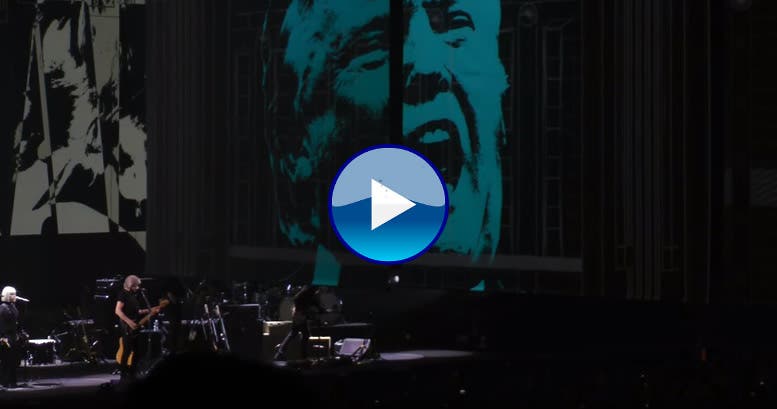 Legendary rock star Roger Waters of Pink Floyd recently held a dress rehearsal for his upcoming tour, Us + Them – and had a special surprise for the small crowd of “friends and family.”

During his performance of Pigs (Three Different Ones) from Pink Floyd’s epic Animals, Waters projected “doctored images of the president in bright, Warhol-like colors depicting him with lipstick, with breasts, with a Klan hood, without pants (showing a tiny penis), with his head on a pig and with the word “charade” (referencing a lyric in the song) written over his face.”

This was followed up by one of Pink Floyd‘s famous flying pigs, this one emblazoned with a cartoon of President Trump’s face with dollar signs for eyes and “I WON!” written upon it.

But Waters wasn’t close to being done yet. He ended his song by projecting Trump’s most infamous and most repugnant quotes on the walls of New Jersey’s Meadowlands Stadium before replacing all the text with “FUCK TRUMP.”

Waters previously told Rolling Stone that his tour was meant to be “an exercise in resistance, not just to Trump, but to all the despots, dictators, thieves and ne’er-do-wells all over the world.”

The vivid imagery and brightness of the colors provoke a striking contrast with the darkness of the subject matter, giving a whole new level of meaning to the song’s Animal Farm-inspired critique of the predatory upper classes and the power of porcine patricians like Trump.