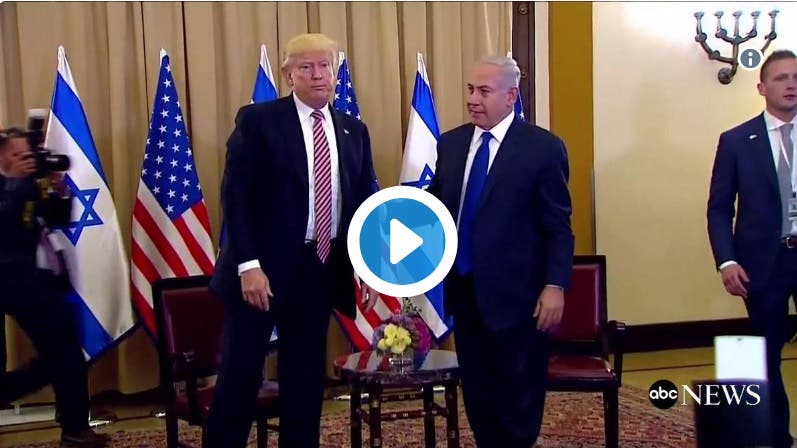 President Trump continued on to the second leg of his overseas trip this morning, landing in Israel to a warm welcome from Prime Minister Binyamin Netanyahu. He was in the nation barely an hour before he committed what is sure to be the first of many gaffes this trip.

For entirely incomprehensible reasons, Trump decided to use his press appearance with Netanyahu to publicly defend himself against the accusations that he passed highly classified information obtained by Israeli intelligence to the Russian foreign minister and ambassador – by claiming that he “never said it was Israeli” intelligence.

Pres. Trump with Netanyahu: "I never mentioned the word or the name Israel" during Oval Office meeting with Russians https://t.co/9GH7DbBTm6 pic.twitter.com/eIJTROLiF9

Nobody ever accused him of giving away the source of the information – but the dolt just confirmed, contrary to his staff’s vehement protestations, that yes, he did give highly classified information away to a hostile foreign power. On top of that, he just confirmed to the world that it was Israeli intelligence.

Israeli officials are reportedly already “furious” and “horrified” at Trump because he “compromised a vital source of information on the Islamic State and possibly Iran,” reports the Jerusalem Post.

They were reportedly “shouting” at their American counterparts over potentially exposing an extremely valuable intelligence asset – not to mention putting his/her life in grave danger. This latest admission is sure to infuriate them even more.

Once again, Trump has made the bizarre decision to defend himself against accusations that were never leveled and ends up digging himself into an even deeper hole. Israel is one of our nation’s closest allies and our most important partner in the Middle East – and Trump has already shoved his foot squarely in his mouth.

Israel is one of our nation’s closest allies and our most important partner in the Middle East, and if their officials were mad before, they will be furious now. Trump has shown he is entirely incapable of being trusted with classified information and if he continues like this none of our allies will be willing to share information with us – and can you blame them?