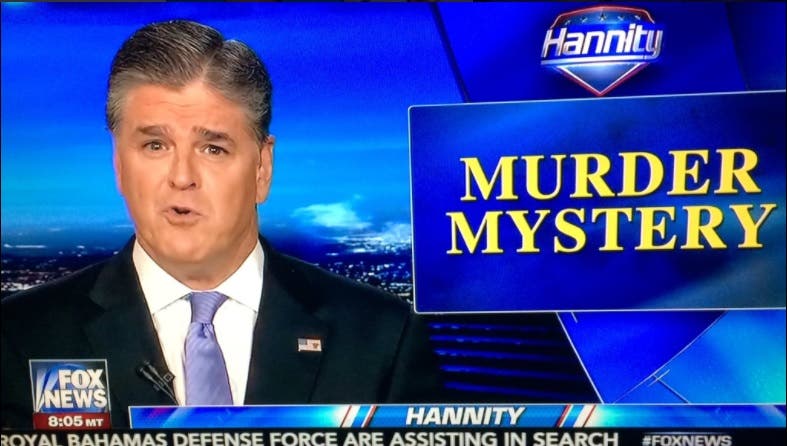 Fox News, still reeling from the firing of top executives and its highest rated news personality Bill O’Reilly over a slew of sexual harrassment allegations, issued a cryptic statement today announcing it was pulling a story published on its website about the death last summer of Seth Rich, a 27-year-old Democratic National Committee staffer, that has become the center of controversial statements by alt-right commentators including their own Sean Hannity.

The right wing has worked tirelessly to link the death of Rich with a Wikileaks dump and use it to stretch logic and few facts to proves that President Trump didn’t collude with the Russians during last year’s presidential election.

The Fox News statement said that their May 16 article “was not initially subjected to the high degree of editorial scrutiny we require for all our reporting. Upon appropriate review,  the article was found not to meet those standards and has since been removed.”

“We will continue to investigate this story,” concluded the Fox News statement, “and will provide updates as warranted.”

The unusual and rare admission of a mistake by Fox News comes the same day the Washington Post published an article with the headline: “The Seth Rich lie, and how the corrosion of reality should worry every American.”

The Washington Post story notes that the conspiracy-crazed website Infowars has promoted the theory that Rich was murdered at the behest of Hillary Clinton, which it finds disgusting.

“But no more disgusting than the lies that Fox News continues to spread about Seth Rich,” adds the Washington Post.

“To hear Fox’s Sean Hannity tell it,” says The Post, “this was an inside job by the Democratic National Committee, where Rich worked; retribution by the Hillary Clinton camp;p for his sharing insider emails with Wikileaks.”

The article notes the conspiracy theory has been “thoroughly debunked” and that Rich’s family has demanded Fox retract its story and apologize.

Yesterday The Post published a story that said whatever passes for “real journalists” at Fox News are embarrassed in particular by the commentary and so-called reporting by Sean Hannity about Rich. (Hannity by his own admission is not a journalist, but rather he is a commentator who gives opinions).

Oddly, the Fox News retraction today makes no mention of Hannity, nor does it say that he will be instructed to stay away from the Rich story on his highly rated show unless he can produce much more compelling evidence than he has broadcast so far.

From his tweets today, it is clear Hannity has no intention of backing off the story or his claims that it was a Clinton conspiracy that clears his close friend President Trump from being accused of collusion with the Russians.

Nor does Hannity seem to care that the real reporters and editors at Fox News consider him an embarrassment.

Hannity continues to rely heavily for his “facts” on a questionable character who goes by the name Kim Dotcom (aka Kim Schmitz, aka Kimble, etc.).

Dotcom is a Finnish-German Internet businessman who currently lives in New Zealand. He first came to attention in Germany where he was charged with selling people’s identities. He was given a two-year suspended sentence.

He then founded Megaupload,  an Internet site that encouraged the pirating of music and movies. He was accused of copyright infringement, money laundering, racketeering and wire fraud by the U.S. Justice Department.

He is currently fighting efforts to extradite him to the U.S. to face multiple criminal and civil charges.

Dotcom currently runs Mega, a cloud storage service that uses encryption to prevent governments or others from knowing the true identities of those who post questionable claims on the Internet or send them via emails.

Dotcom claims to have secret connections to Wikileaks and has made claims linking Rich and his death to the Clinton conspiracy theory. Hannity eats it up.

Hannity’s ratings have fallen but he is still among the highest rated shows on cable news. Viewers don’t really understand he is not a journalist, or they ignore that he is a shill for President Trump. During the 2016 campaign, Hannity was an advisor to the Trump campaign even as he promoted Trump relentlessly on his Fox News show.

The retraction by Fox News today is a step in the right direction. It is hard to believe it would have happened if the late Roger Ailes was still in charge, but there does seem to be a move to be at least somewhat credible as a news organization.

However, as long as Hannity is allowed to spew his garbage, the Fox News statement is as useful as yesterday’s flushed away toilet paper.

If the network wants  to reclaim any sense of real credibility, it will have to get rid of Hannity as it did O’Reilly. It needs to clearly label what among it reportage really is “fair and balanced” and what is Hannity/Dotcom/alt-right conspiracy theory balcony.