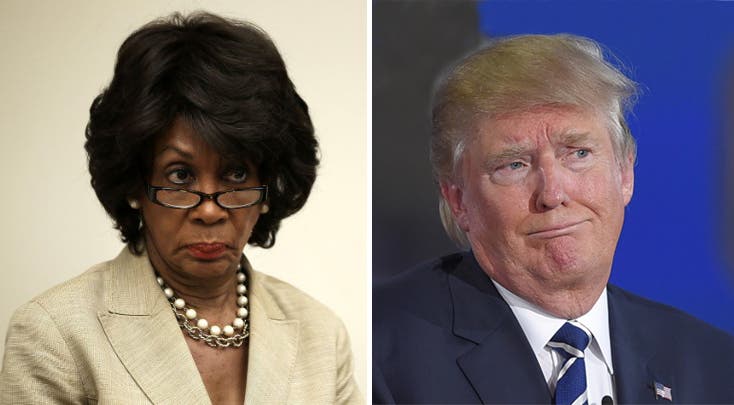 In the immortal words of Cuba Gooding, Jr., in the hit movie Jerry Maguire, “Show me the money!” That’s what Rep. Maxine Waters (D-CA) is shouting today.

At issue is the personal guarantee Trump made when he took out those loans, and how the bank may try to restructure them.  According to Bloomberg News:

“…Under the agreements, if the loans default, the bank could go after Trump’s other assets. Since Trump won the presidential election in November, bankers have tried to eliminate the awkward prospect of someday collecting from a sitting U.S. president. If the bank removes Trump’s personal guarantee, critics might accuse it of trying to curry favor with the president. If the interest rate rises as part of any restructuring, it could also risk the scorn of the Trump business organization.”

Furthermore, there remains some doubt about whether the ‘guarantee’ is limited to Trump’s and Kushner’s assets, or if they needed a co-signer, as it were, to secure those loans.  Many have long suspected that Trump’s guarantors are in fact foreign banks with ties to shady Russian oligarch billionaires – up to and including banks controlled by Vladimir Putin.

That’s not the President’s only Russian link here.  Trump’s Commerce Secretary, Wilbur Ross, was the chairman of the board of the Bank of Cyprus prior to joining the cabinet. That bank is heavily financed by Russian oligarchs, including those with direct ties to Putin.  The Bank of Cyprus has been identified by U.S. Treasury authorities as the source of mysterious payments made to former Trump Campaign Chairman, Paul Manafort.

The Bank of Cyprus is also linked to Dmitry Rybolovlev, known as the King of Fertilizer in Russia.  He was at one point the largest shareholder in the Bank of Cyprus, and he purchased a Florida mansion from Donal Trump for the head scratching sum of $100 million – head scratching because Trump bought the place just four years earlier for $41 million.

And the CEO of the Bank of Cyprus, appointed in 2014, is… drumroll… Josef Ackermann, the former CEO of Deutsche Bank who was at the helm as a Russian money laundering scheme got underway in 2012.

Which explains the second part of the request made by congress today.  In the letter, Rep. Waters and her fellow Democrats on the Financial Services Committee asked Deutsche Bank for its records on the nortorious Russian mirror trading scandal that its New York office helped facilitate.

In short, the scandal involved an elaborate scheme by which Russian billionaires secretly converted rubles to dollars, bypassing all money laundering controls, “by buying and selling identical volumes of stock through related entities in Moscow and London,” according to the New Yorker.  Over four years, 2012-2016, the bank successfully transferred over $10 billion U.S. worth of Russian rubles.  After investigators uncovered the scheme, Deutsche Bank had to pay a $630 million in penalties to U.S. authorities.

According to a Mother Jones report out today as well:

“In February, the Guardian reported that sometime after Trump launched his bid for the presidency, Deutsche Bank undertook a review of Trump’s business with the bank. The review, which has not been made public, reportedly did not find a link to Russia. But the Democrats want to see that review to make sure.”

Because the Democrats are in the minority of congress, their request does not come with the power of a subpoena behind it.  Deutsche, therefore, is not compelled to hand over anything.

How the bank and the White House treat the request will be telling.  If nothing else, it’s good to see Democrats finally using the power of congress to pull on the threads that link the President to Russia.