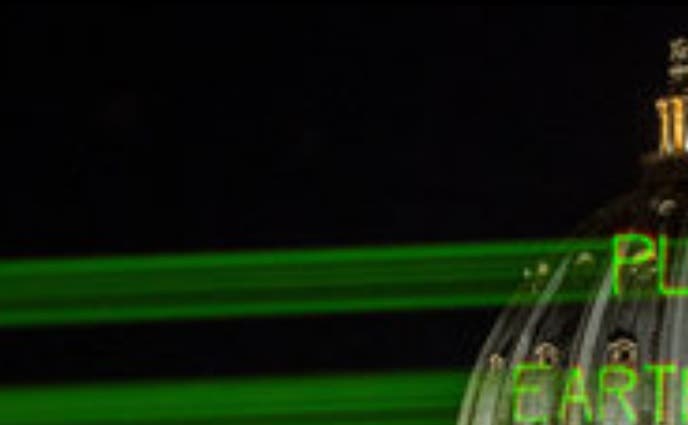 President Trump has traveled to Italy for the third leg of his tour of the world’s largest Abrahamic religions and is due to visit the seat of the Catholic Church in Vatican City for a meeting with his Holiness Pope Francis at any moment now.

The environmental activist group Greenpeace’s Italian and German offices teamed up to send Trump a welcome message that he couldn’t ignore – by projecting it on to the gilded domes of St. Peter’s Basilica itself. 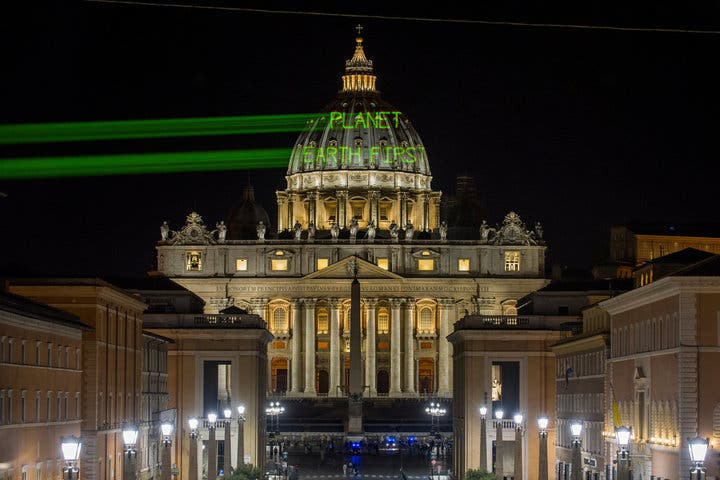 The words, “PLANET EARTH FIRST,” are an obvious reference to President Trump’s motto of “America First,” which itself is a reference to a Nazi sympathizer group from the Second World War era.

President Trump is an avowed climate change denier who has staffed his administration with fossil fuel lobbyists and fellow climate change deniers. He has made it clear that he is intent on dismantling the United States’ nascent clean energy program and withdrawing our nation from the international greenhouse gas reduction treaty, the historic Paris Agreement.

Pope Francis himself almost certainly approves of the message being projected on the Holy See. He distinguished himself from his predecessors by taking a very active voice in the international political arena, warning the world about the necessity of a substantial effort to combat climate change. He has decried climate change as an “a global problem with grave implications” and a “sin” against the earth.

The world watches with anticipation as to how the meeting between the Holy Father and an up-jumped sleazebag real estate mogul who has publicly attacked the Pope on several occasions will play out – but it’s clear the tone has already been set even before Trump defiles that hallowed ground with his unworthy feet.