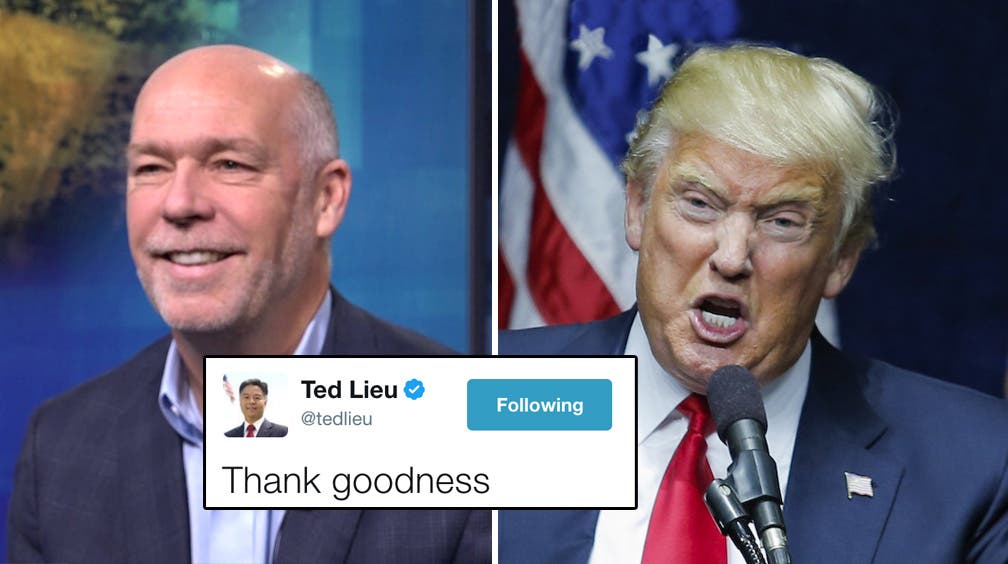 Twitter is ablaze with reactions to the ‘slam heard round the world’ tonight, as politicians, reporters, and trolls of all shapes sizes respond to Montana Republican Greg Gianforte’s apparent body-slamming of a reporter.

Audio of the incident went viral within minutes, and now everyone in piling on.  Congressman Ted Lieu (D-CA), no stranger to Twitter, was among the first, and the best.

Thank goodness Trumpcare is not yet law. Injuries from Greg Gianforte assaults are still covered. He should also withdraw from the race. https://t.co/M3v9GTBxVx

The race, of course, is the race to fill Montana’s lone congressional seat, vacated when Republican Ryan Zinke resigned to become President Trump’s Secretary of the Interior. Gianforte is running neck-and-neck with Democrat and folk music icon Rob Quist, someone he should be decisively beating in deeply Republican Montana.

Rep.  Lieu scored the double zinger by referencing TrumpCare, which the Congressional Budget Office had just reported would force 23 million Americans off of health insurance within 8 years.  The reporter, Ben Jacobs of British newspaper The Guardian, sustained minor injuries from the incident.  He told MSNBC host Chris Hayes that he needed to get his elbow checked out and was typing with one hand for the moment.

The Montana special election is tomorrow, and the Republican Gianforte now finds himself under investigation for assault and battery as voting gets underway.  Not exactly finishing strong, there, are we Greggy?