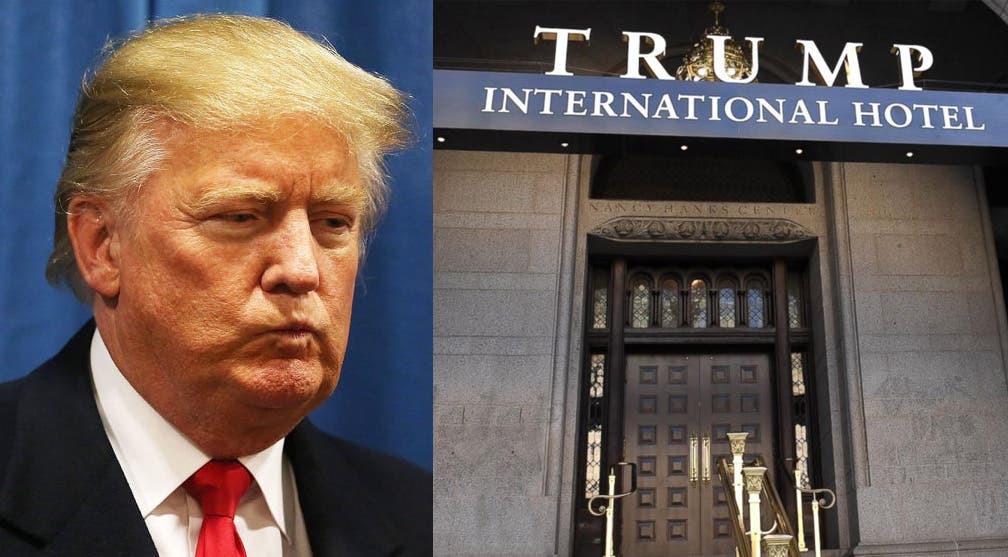 Donald Trump promised to donate all foreign profits his businesses earned to the United States Treasury.  He made this promise not out of the goodness of his heart, but to skirt the one constitutional law that restricts what presidents can receive from foreigners.

It’s now some 120 days into the Trump presidency, and the Treasury hasn’t received a dime.  More damning still, according to an NBC report, the Trump Organization hasn’t revealed any detailed plans about how those donation amounts will be collected and calculated.  Trump Organization properties aren’t even tracking transactions made by foreigners.

Back in December, then-President Elect Donald Trump announced he was working on a plan to deal with potential conflicts of interest his many business dealings would present.

The President of the United States is, interestingly, exempt from nearly all of the conflict of interest laws that forbid most other federal workers and elected officials from financial gain while in office.  The one law the president is NOT exempt from, however, is the ’emoluments clause’ in the Constitution that forbids the commander in chief from receiving any gifts or payments of service from foreigners.

Dealing with those conflicts was never really seriously discussed in the media because no one expected him to win.  But speculation began swirling after the election over the many ways in which foreigners, acting on their own behalf or as an agent of a foreign government, could curry favor with the President in direct violation of the emoluments clause.

They could, say, overpay for a condo or two at Trump Tower; or buy-out four floors of the Trump International Hotel in Washington for their visiting head of state; or, conceivably, buy 20 tons of Trump Steaks™ for a BBQ in Red Square.

Most presidents and elected officials choose to put business assets and other vulnerable holdings into a blind trust managed by a third party to remove any practical possibility such dubious transactions might take place. When Trump announced he would hold a press conference to present his plan, observers expected something like a blind trust arrangement would be revealed.  What we got instead was a series of promises.

The press conference itself, which team Trump originally called for December but pushed back a month, was a carefully choreographed affair.  A podium with a sign that read “Office of the President Elect” was set in front of a row of American flags. Stacks of manilla folders stuffed with paper were piled on a table next to the podium.  Sean Spicer, the soon-to-be press secretary, spoke first and announced the President Elect, who stepped to microphone and began to speak.

After some typical Trump banter with reporters, he called on his lawyer, Sherri Dillon, to step to the podium and explain the details of how Trump planned to address his conflicts of interest.

First, Dillon said, Trump would not divest from his businesses.  Why?  Because it wasn’t fair.  He’d worked too hard and his businesses too vast and complex for Americans to expect him to sell them off or move them into some kind of blind trust.

“President-elect Trump should not be expected to destroy the company he built. This plan offers a suitable alternative to address the concerns of the American people, and selling the entire Trump Organization isn’t even feasible.”

Instead, he would remove himself from day-to-day operations and hand over all Trump Organization decision making to his sons, Don Jr. and Eric.  Trump was careful to note that he wasn’t legally required to make such a move, but he did it anyway.

Second, to satisfy any exposure to potential emoluments clause violations, Dillon announced that the Trump organization had decided to separate any and all profits generated by transactions made by foreigners at Trump properties or through any other Trump business interest, and donate those profits directly to the United States Treasury.

Turns out, they’re not even tracking transactions by foreigners.  To Trump’s skeptics, this isn’t a surprise.  But to all of his followers who pointed to this “plan” as proof that he’s honest about removing the clouds of doubt that fog-up his presidency, what say you now?

Trump has again proven that he’s much better at making promises than keeping them.   In fact, only the most gullible of voters still believe he ever intended to keep them in the first place.

And by the way… those thick stacks of paper stuffed into manila folders and piled on the table next to the podium at the press conference – the ones that Trump claimed were just ‘some’ of the documents required for these business arrangements he’d made?  Turns out they were just blank sheets of paper.