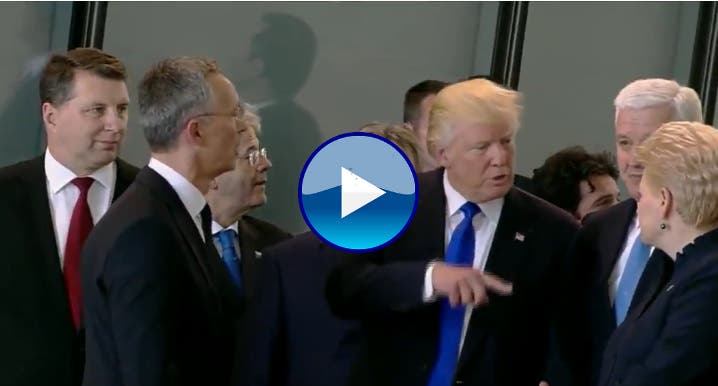 At the NATO summit in Brussels, Belgium, the American President is already fighting an uphill battle for affection, and it just got even more difficult. Per his undying need for the spotlight, Trump just very obviously shoved Montenegro Prime Minister Dusko Markovic out of the way so that he can lead the group.

Did Trump just shove another NATO leader to be in the front of the group? pic.twitter.com/bL1r2auELd

Trump’s popularity with the North Atlantic Treaty Organization is already waning after having called the group “obsolete” during the presidential campaign and accused our allies of not paying their fair share. His administration had previously come under fire when Rex Tillerson, the Secretary of State, announced he would skip a NATO meeting in the same week he visited Moscow.

Trump has since attempted to rectify his image in the eyes of the international community. His first international trip this week, however, has been riddled with gaffes. Aside from being publicly denied – twice – by his wife, Melania, Trump also infamously claimed that he had “just gotten back from the Middle East” upon arriving in Israel. In his defense, geography can be hard.

Upon his arrival in Belgium, Trump was met with nearly 10,000 protestors marching against his “war agenda.”

Whereas the United States was once regarded as a beacon of compassion, integrity, and opportunity, Trump’s poor diplomacy has turned our nation into the laughingstock of the international community. Our President’s inability to act like an adult is taking a largely avoidable toll on America’s standing in the world. When Trump campaigned on a promise of “America First,” we never realized he meant it literally.