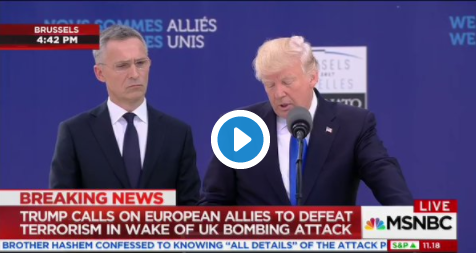 President Donald Trump is on the fourth leg of his trip abroad. Today he is in Brussels, a city he once described as a “hellhole,” to meet with NATO and EU leaders.

In a brief speech, Trump used a condescending tone to lecture them on how much they should spend on defence.

This is an important signal from the President, who has previously called NATO “obsolete.” An endorsement of article 5 would serve not only to indicate that Trump now fully backs the Alliance, but also send a strong message to Russia that America is still willing to defend her European allies.

Trump instead lambasted our NATO allies in broken English about “not paying what they should be paying and what they are supposed to be paying for their defence.”

“This is not fair to the people and taxpayers of the United States and many of these nations owe massive amounts of money from past years and not paying in those past years.”

The faces of other NATO leaders says it all (video below). The ashen expressions suggest a lot of them were biting their tongues and holding back screams of frustration.

They were probably also trying not to laugh at how badly Trump can read. It’s like listening to a fifth grader do his reading homework.

Perhaps Trump should stick to reading in 140-character segments, any more might stress him out.

Trump isn’t entirely wrong. Defence spending in Europe has been waning in the last two decades thanks to the end of the Cold War, and a resurgent Russia has taken many by surprise.

While Europe’s defences do need an injection of funds from nations that haven’t been paying their fair share, Europe’s defences also need an American President who is prepared to stand up to Russia instead of colluding with them to win an election.

The fact that Trump has decided against endorsing article 5 does more damage to Europe that a $119 billion shortfall in funding.

Watch the speech below:

*Look at their faces* and the whispering as Trump admonishes leaders over NATO financial obligations. pic.twitter.com/gLCYgKTdi3