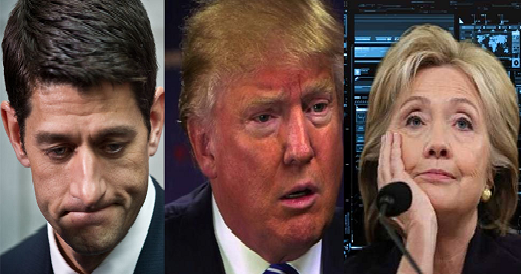 The intelligence community, law enforcement, Democrats and the media have long suspected, investigated and reported on the alleged collusion between President Donald Trump’s election team and the Russian government.

Trump and Republicans have hit back with allegations of “fake news” and ridiculous conspiracies involving President Obama trying to sabotage Trump’s Presidency.

But a shocking yet unsurprising report published yesterday by the Wall Street Journal confirms that Trump’s team benefitted from Russian hacking operations and asked Russian hackers for help with information that could be a detriment to the Clinton campaign.

Aaron Nevins, a blogger and Republican political operative, confirmed to the Journal that he asked hacker Guccifer 2.0, widely believed to be a Kremlin agent, to “feel free to send any Florida-based information” after he learned that Guccifer 2.0 had hacked into the Democratic Congressional Campaign Committee (DCCC).

Nevins admits that once he’d read the stolen documents he realized “it was a lot more than even Guccifer knew that he had.”

The DCCC hack also contained sensitive data on voters in key Florida districts. The data broke down how many people were dependable Democratic voters, undecided Democrats, Republican voters and other useful information.

This information is invaluable to those seeking to use targeted ads to win elections. Nevins likened the information to a “map to where all the troops are deployed.” He also defended his actions, saying:

“I just threw and arrow in the dark. If your interests align, never shut any doors in politics.”

After Nevins published some of the material on his blog Guccifer 2.0 sent the information to a close associate of Trump’s, Roger Stone. Stone is currently under investigation for potential collusion with Russia.

Stone explained to the Journal that while he did receive a link to Nevin’s blog, he never shared the stolen data with anybody.

Republicans have confirmed that this information did make a difference. Anthony Bustamante, a campaign consultant for Representative Brian Mast (R-FL) said he “did adjust some voting targets based on some data I saw from the leaks.”

“The NRCC’s use of documents stolen by the Russians plays right into the hands of one of the United States’ most dangerous adversaries. [The GOP] will be complicit in aiding the Russian government in its effort to influence American elections.”

Naturally, Republicans had ignored Democrat pleas not to use the stolen information for political gain.

This information presents yet more proof that the Republican party benefitted directly from the ill-gotten gains produced by Russia’s hacking campaign. Sadly it doesn’t implicate Trump,

Sadly it doesn’t implicate Trump directly, but it does shine a light on his phoney election victory.

The orange narcissist will squirm knowing that Americans across the country have caught on to the fact that he didn’t win the election because of personal merit, but because nefarious forces mobilized to put him there.