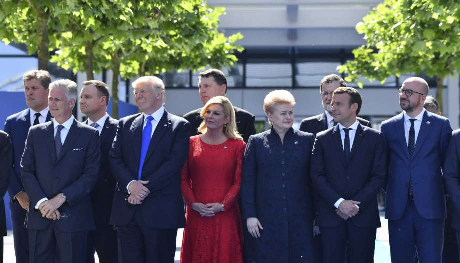 President Donald Trump has returned from his eventful trip abroad. The highlight seems to have been the President gallivanting around Europe trying his hardest to piss off every national leader he met.

And it seems he’s done a very good job of doing just that.

A US State Department Official has revealed the “arrogance” Trump displayed abroad:

“When it comes to diplomacy, President Trump is a drunk tourist.

Loud and tacky, shoving his way around the dance floor. He steps on others without realising it. It’s ineffectual.”

We already knew Trump was acting like a bully on camera, but now we have proof that this wasn’t him trying to put on a brave face for the media. It’s just who he is.

It seems that Trump’s first foray with diplomacy has ended in disaster, with European and NATO leaders beginning to accept the fact that they cannot rely on the U.S. for support anymore.

This isn’t true for Saudi Arabia however.

In exchange for Trump’s silence on issues like human rights abuses, the catastrophic war in Yemen or the fact that the funds for many of the terrorist groups we fight today come from Saudi coffers, the oil-rich absolute monarchy is happy to hand over billions of dollars for arms, and a cute gold medal so Trump can feel special.

After literally bowing to the Saudi King, and annoying everybody in Israel with his geographic ignorance, Trump then travelled to NATO headquarters in Belgium.

During his speech, Trump condescended NATO leaders and displayed his ignorance of how NATO works. He then handed Russia a strategic victory by failing to pledge his support for Article 5 of the NATO treaty, which covers collective defence.

If article 5 is triggered, every NATO country must take up arms to defend the nation attacked. By not pledging his support, NATO countries are now uncertain as to whether they can fully rely on U.S> support in times of conflict.

In Italy for the G7 summit, he got to do something else he loves: destroy the environment, and any environmental protections, especially those created under Obama.

In this case, it was the Paris Climate Change Agreement, a landmark measure, already signed by 195 nations, that pledges to take concrete steps to begin halting the process of climate change.

Donald Trump didn’t like it, and will make a decision “next week.”

The President decided that he would behave in the exact fashion that Europeans expect from American college students on a trip abroad: loud, drunk, obnoxious, ignorant of local cultures and customs and, frankly, annoying to have around.