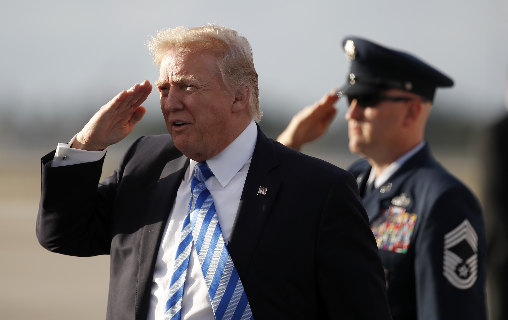 A U.S. NATO Envoy Just Admitted That Thanks To Trump The Days Of U.S. Global Leadership Are Over

Today is Memorial Day, a federal holiday that gives us the chance to reflect on and remember the bravery and sacrifice of those U.S. service personnel who have made the ultimate sacrifice for the freedom and well-being of our nation.

As can be expected, President Donald Trump took to Twitter to announce to the world that he will be paying his respects to the fallen later today at Arlington National Cemetery.

Today we remember the men and women who made the ultimate sacrifice in serving. Thank you, God bless your families & God bless the USA!

I look forward to paying my respects to our brave men and women on this Memorial Day at Arlington National Cemetery later this morning.

But don’t be fooled. For Donald Trump, the military is just another pawn he can use to appear likeable to the American public.

To highlight that fact, here is a list of all the times Trump disrespected our military.

If he can’t show respect to our armed forces on an every-day basis, how can you expect him to properly remember the fallen on Memorial day?

1. The time Trump tried to argue John McCain wasn’t a war hero.
Almost two years ago Trump was at a Family Leadership Summit in Ames, Iowa. During the event Trump said of Senator John McCain (R-AZ): “He’s not a war hero. He was a war hero because he was captured. I like people who weren’t captured.”

Senator McCain was famously a Navy pilot during the Vietnam war. After being shot down McCain spent five-and-a-half years in the “Hanoi Hilton”, a North-Vietnamese prison synonymous with the torture of U.S. POWs.

Trump later tried to backtrack, saying “If somebody’s a prisoner, I consider them a war hero.” He also added: “I think John McCain’s done very little for the veterans. I’m very disappointed in John McCain.”

2. The Time Trump compared his sex life in the 1980s to a war experience.

In a radio interview with The Howard Stern Show, Trump made some very crude and disrespectful comments about his sex life, before trying to compare them to experiencing warfare:

“I’ve been so lucky in terms of that whole world. It is a dangerous world out there – it’s scary, like Vietnam. Sort of like the Vietnam era. It is my personal Vietnam. I feel like a great and very brave soldier.”

3. The time Trump congratulated a soldier he just awarded the Purple Heart.

In April this year President Trump paid a visit to the Walter Reed National Military Medical Center. There he awarded a Purple Heart to Army Sergeant First Class Alvaro Barrientos, who was wounded in Afghanistan.

The President said: “When I heard about this I wanted to do it myself. Congratulations. Tremendous.”

The look of horror on Barrientos face as the President congratulates him for getting his leg blown off is palpable. Here is a man who has sacrificed his health, and suffered life-changing injuries for his country being congratulated on the fact by a man who has never worn a uniform.

Trump’s lack of tact is unbelievable.

4. The time Trump “received” a purple heart and said it was “easy.”

While on the campaign trail in Ashburn, Virginia, retired Lt. Col. Louis Dorfman gave Trump his Purple Heart, saying “That’s my real Purple Heart. I have such confidence in you.” Trump later recounted the moment:

“And I said, ‘Man, that’s like big stuff. I always wanted to get the Purple Heart. This was much easier.”

5. The time Trump attacked a Muslim couple whose son was posthumously awarded a Gold Star after protecting his unit with his life.

Trump made a response to the impassioned speech made by Khzir Khan and his wife at the Democratic national convention. His only comment was: “I’d like to hear his wife say something. “If you look at his wife, she was standing there,” Trump said. “She had nothing to say. She probably, maybe she wasn’t allowed to have anything to say. You tell me.”

No recognition of the fact that their son had died for his country. No comment on the substance of their speech, which correctly pointed out that Trump has never sacrificed anything for the country from which he has taken so much. Merely a comment on its delivery.

The only reply Trump offered was a comment on the speech’s delivery.

Trump later tried to honor their fallen son, Captain Humayun Khan, but it was too little, too late.

Like the privileged son of a rich businessman he is, Donald Trump received five separate draft deferments during the 1960s. Four of them were for college.

After he left college Trump was a model American youth. Tall, athletic, an unblemished medical history that would make him the perfect candidate to be drafted to go serve his country in Vietnam, where high-quality recruits were desperately needed.

But in 1968, right after he graduated, Trump suddenly received the diagnosis of bone spurs in his heels.

This diagnosis translated into a coveted 1-Y medical deferment, which exempted him from any and all service in the U.S. armed forces. At that time the U.S. was drafting hundreds of thousands of troops to go to Vietnam, and Trump wasn’t going to be one of them.

So next time Donald Trump tries to argue that he’s pro-military, that he supports veterans and wants the U.S. to remain the strongest military power in the world, remember that President Donald Trump has never made any sacrifices for his country. In fact, Trump actively tried to avoid his obligations.

In fact, Trump actively tried to avoid his obligations. Don’t let him forget it.