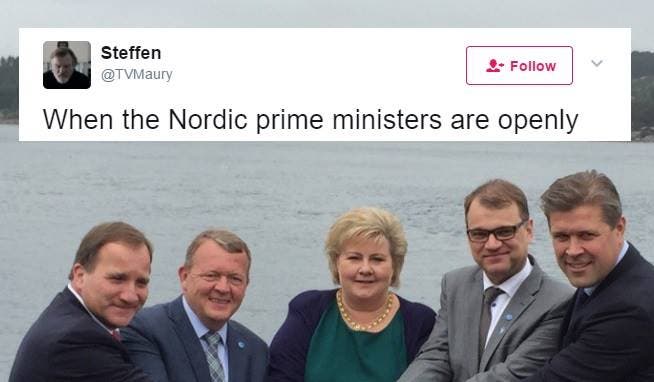 The most enduring image from Trump’s bumbling trip overseas has to be the strange, instantly viral photograph of him in Saudi Arabia, placing his hands on a glowing orb alongside King Salman. As soon as it was released, the internet was thrumming with tweets mocking the photo op, with most of them centering around jokes about the occult appearance of the orb.

Today, the Nordic prime ministers released a photograph mocking Trump. In it, they’re seen placing their hands on a football:

It should come as no surprise that European leaders are eager to make fun of Trump. The European leg of his trip was a disaster with Trump doing everything from calling German car manufacturers “evil,” to failing to endorse Article 5 of the NATO treaty, the segment which guarantees collective defense from all member nations for all member nations. The photo also underlines how little the world thinks of the American president. He’s an easy joke for them to make.