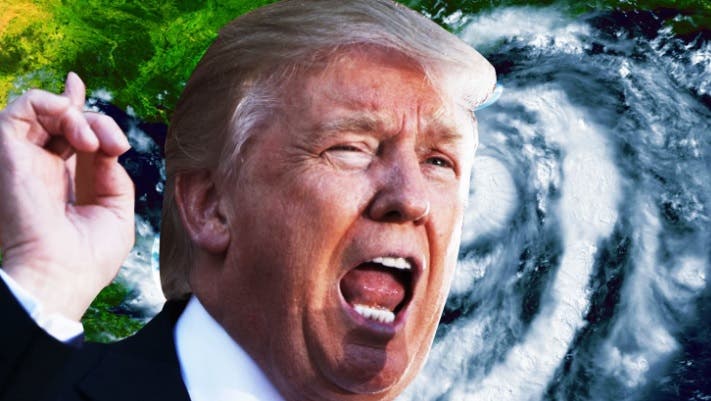 Hurricane season starts today, but more than four months into the failing Trump presidency, there’s nobody in charge at NOAA or FEMA – the two most important federal agencies that deal with hurricane forecasting and responding to natural disasters. The Tampa Bay Times reports:

Five months after Donald J. Trump was sworn in as president, no one has taken the reins at the Federal Emergency Management Agency, which is in charge of preparing for and then dealing with the aftermath of a hurricane. The last FEMA boss was a Florida man, W. Craig Fugate, who departed in January… Trump finally nominated someone at the end of April, but he has yet to be confirmed.

Trump meanwhile has made no move to appoint a new boss at the National Oceanic and Atmospheric Administration, the agency in charge of the National Hurricane Center and the National Weather Service, which provide hurricane forecasts and hurricane warnings in advance of a storm.

Trump is having a terrible time trying to find staffers already, but when it comes to an agency like NOAA, there are political reasons they hope America’s forecasting systems fail. NOAA is in charge of climatology and studying global warming.

In fact, NOAA just released a study showing that 2016 had the second highest rise in carbon dioxide levels – greenhouse gases trapping warm air in our atmosphere – that have ever been recorded.

Coincidentally, they released their report on the same day Trump chose to pull out of the Paris Agreement to fight climate change globally.

Scientific reports show that increased greenhouse gas emissions are impacting the frequency and strength of tropical storm systems, which impact the Atlantic and Gulf Coasts and can even hit California occasionally, though not as frequently as the Mexican coast.

The United States has been the world’s leader in science and technology for decades, but the Trump Administration prefers to stick their head in the sand.

Keeping FEMA and NOAA leaderless is another battle between Trump and reality that he cannot win, but millions of Americans can lose.