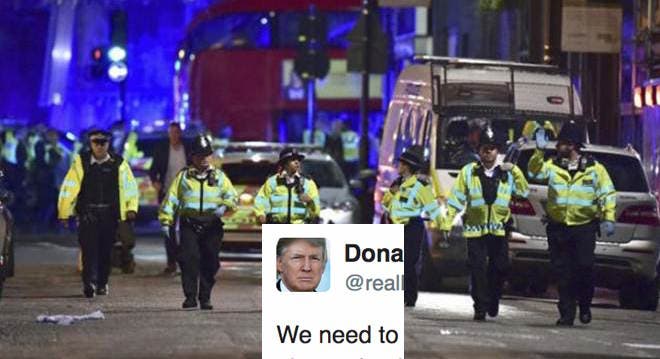 Amid today’s shocking news of at least three suspected terror attacks hitting London, from stabbings to vehicles mowing down pedestrians, Trump took to Twitter for a decidedly selfish reason.

Trump’s tweet comes on the heels of his request that the Supreme Court reconsider his travel ban, which has already been struck down twice as unconstitutional. In Trump’s latest unsuccessful appeal of the ban, the 4th Circuit Court of Appeals said that the executive order “speaks with vague words of national security, but in context drips with religious intolerance, animus and discrimination.”

The President’s comment also touches an international sore spot between the United States and the UK. British police were reportedly incensed after American leaks revealed the names of the suspects for the Manchester bombing before UK authorities intended to release them, potentially damaging their investigation.

The fact that Trump would then retweet unconfirmed reports that the attacks were indeed terror-related shows that he learned very little from his previous spat with Theresa May.

British Prime Minister May was very angry that the info the U.K. gave to U.S. about Manchester was leaked. Gave me full details!

Trump should be ashamed of exploiting London’s horrific tragedy to promote his own unconstitutional and staunchly un-American executive order. Now, even the international community will get a firsthand glimpse at our President’s transparent attempts to manipulate a disastrous situation for his own personal gain.