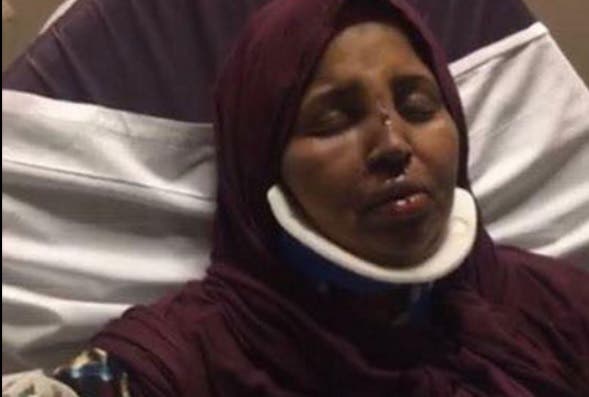 Yet another horrifying hate crime has been committed in the United States, once again leaving a victim beaten and bloody for standing up to the bigoted abuse of a white supremacist.

Rahma Warsame of Columbus, Ohio, was allegedly beaten unconscious last night by a white male for defending another Muslim woman from harassment, according to the Columbus chapter of the Council of American-Islamic Relations.

The attacker reportedly yelled “you will be all shipped back to Africa!” before brutally assaulting the Somali-American single mother, who sustained several facial fractures and lost four teeth. Little official information is available, because the police allegedly released the perpetrator without any charges, as per witness accounts gathered by CAIR:

The woman, who reportedly intervened to protect another Muslim woman from harassment by the alleged attacker – a white male – was beaten unconscious, resulting in facial fractures and the loss of several teeth. According to the victim, the alleged attacker reportedly screamed “you all will be shipped back to Africa” prior to beating. CAIR-Columbus is her legal representative in the case.

According to witnesses, the alleged attacker was interviewed by police, but released without charge. He had reportedly made racist statements to neighbors in the recent past.

CAIR-Columbus held a press conference this afternoon in which they denounced the attack as a hate crime and demanded an investigation by the Columbus Police Department.

Activist group Yes We Can Colombus has issued a similar statement of support for Warsame.

The police have announced that they have found “no evidence” that the attack was a hate crime; however, they also said that “after interviewing multiple victims and witnesses, Columbus Police say no arrests were made because of conflicting stories by everyone at the scene, and a lack of evidence.”

Draw your own conclusions from that statement, but if CAIR’s national office felt the need to go public with this information, it’s clear there’s much more at play here than meets the eye.

If you’d like to contribute to Rahma’s medical bills, you may do so here.