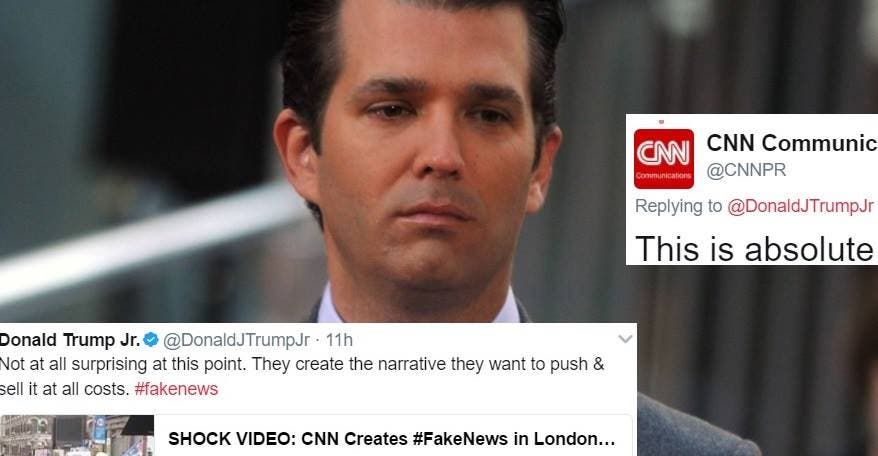 The Trump administration isn’t content to simply lie to the public, they actively work to destroy the truth, repeatedly referring to reputable reporters and news stations as “fake news.” It’s part of a concerted effort to mislead and confuse the American public.

Most recently, the far right concocted a conspiracy alleging that CNN had staged a fake protest. In reality, the CNN news team was reporting on an organic rally of Muslim mothers protesting ISIS and calling for love, not hatred. CNN arrived on the scene and allowed the protestors to pass through a police cordon so that they could show their signs on camera.

Donald Trump Jr., the president’s son, leaped at the chance to spread the conspiracy theory on his Twitter account:

Not at all surprising at this point. They create the narrative they want to push & sell it at all costs. #fakenews https://t.co/hv4Ke9dAZD

This is absolute nonsense. You are misleading your followers. CNN didn't stage a demonstration. Those are the facts. https://t.co/mWQFvw2fS1

CNN minced no words, calling out the nonsense for exactly what it is. The news station admirably refuses to allow Trump and his proxies to invent their own facts. The video, originally shared by an  infamous conspiracy theorist, can be seen below:

It should be clear to anyone who takes even a second to review and consider the video that nothing is “being staged.” This is just another example of Trump supporters trying to denigrate legitimate news sources that they deem to be hostile to their mendacious agenda. They must be exposed every time they try to spread lies like this.