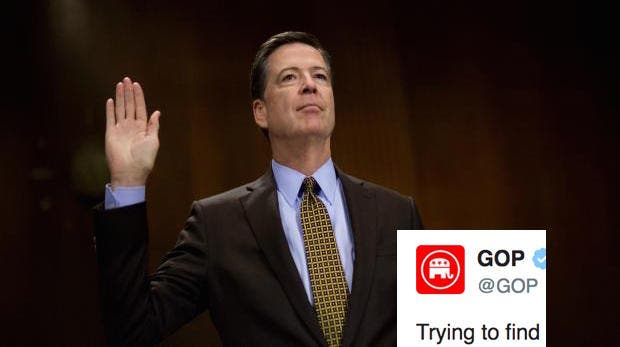 Trying to find something of substance in Comey’s opening statement like pic.twitter.com/igLC4JPREg

On the eve of Comey’s highly anticipated testimony, a copy of his opening remarks was posted online. The former FBI Director will outline a troubling and controversial conversation that he had with President Trump regarding his disgraced national security adviser Michael Flynn.

“He then said, ‘I hope you can see your way clear to letting this go, to letting Flynn go. He is a good guy. I hope you can let this go.’ I replied only that ‘he is a good guy.’ (In fact, I had a positive experience dealing with Mike Flynn when he was a colleague as Director of the Defense Intelligence Agency at the beginning of my term at FBI.) I did not say I would ‘let this go.'”

Trump also told Comey, “I need loyalty, I expect loyalty” during their first dinner. Comey, for his part, offered “honesty” instead.

While this testimony is certain to be damning for Trump, the Republican Party continues to pretend that the ship isn’t sinking, even as water keeps pouring in.

But Twitter pretends for no one, and they responded to @GOP in the best way.

Oh God, a Republican is trying to be funny again.

Did Putin write this for you? #TrumpObstructed

Good to see that, like your head honcho, you have absolutely no sense of the appropriate. Shocking.