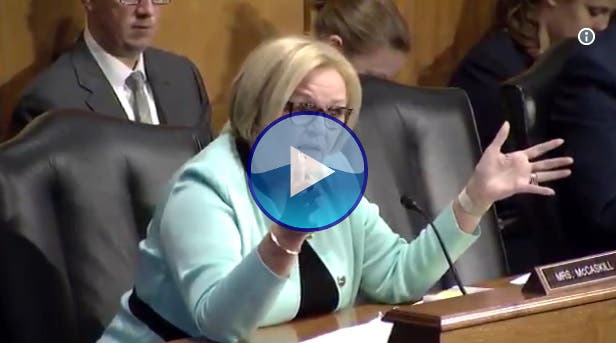 While the nation is distracted by the drama unfolding in the White House as the President publicly goes to war against the FBI Director he fired, Senate Republicans are huddled in back-rooms preparing to repeal and replace the Affordable Care Act with a bill nobody but Mitch McConnell and a few health insurance lobbyists have read.

Senator Claire McCaskill (D-MO) called out her Republican colleagues during a recent Senate Appropriations Committee meeting and had just one question: “Will we have a hearing on the healthcare proposal?”

Chairman Orrin Hatch (R-UT) looks confused, consults with an aide, and mumbles in response “Well, I don’t know if there will be another hearing. But we’ve invited you to participate and we’d love your support…”

McCaskill refuses to accept that answer and recounts how she attended the many hearings for the Affordable Care Act, during which dozens Republican amendments were considered and accepted.

“You just said you want my support, but for what? We don’t even know! We have no idea what’s being proposed. There’s a group of guys in a back room somewhere that are making these decisions.”

Senate Majority Leader Mitch McConnell (R-KY) invoked the Senate’s Rule 14 yesterday during the Comey Hearing, which allows the bill to be brought to the floor for a vote without giving the Democrats a chance to amend or discuss the bill.

The Republicans are intent on ramming the bill through Congress before the American people knows what hit them. It goes without saying that this is not how our government is supposed to function. Far from “governing,” the GOP is off the rails on a nihilistic crusade to undo everything that President Obama ever accomplished with no regard to the effects on the American people – and we must make them pay for it this November.

"Will there be a hearing on the health care proposal?" Senator @clairecmc asked today in the Finance Cmte. You should watch: #Trumpcare pic.twitter.com/rmKB0rGnTM