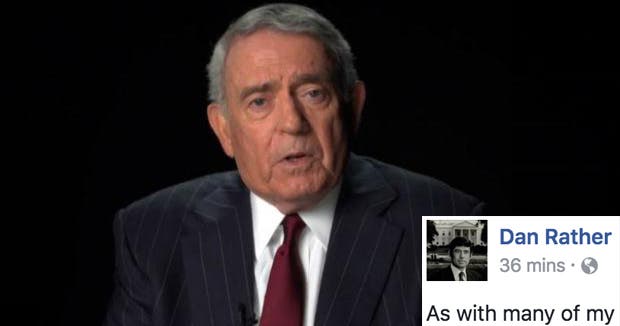 For the last several months, Dan Rather’s poignant insights into the threats of the Trump regime have brought the legendary journalist acclaim with a new generation of concerned citizen. Today, he returned to Facebook with a chilling warning about the unprecedented times we are living in and the dangers President Trump poses to America’s future.

Rather refuses to let this become normal, and here, he perfectly illustrates why its crucial that we all do the same.

“As with many of my fellow Americans, i don’t consider myself partisan politically – never have. I am a registered independent voter and have been for most of my life. With that in mind, I submit the following:

“Can we please get this out of the way? None of what is happening at the top of government now is normal. None of it. And no one should normalize it. No one.

“We have a President who lies without a second thought. Big bold lies that are easily disproven. That is not normal.

“We have serious allegations around obstruction of justice by that President. That is not normal.

“We have an FBI director fired for insisting to continue pursuing a serious investigation into the sanctify of our republic. It has never happened before in our history. That is not normal.

“We have a hostile foreign power attacking and undermining our electoral process. That is not normal.

“We have an Attorney General under a serious shadow of association with said foreign power, with indications that there is much more to this story than we yet know. That is not normal.

“We have Federal judges, our closest foreign allies, and the free press under scurrilous attack from the President and his enablers. At the same time we have despots praised. That is not normal.

“We have an Administration fanning the flames of division over race, ethnicity, religion, sexuality, and gender. That is not normal.

“We have an overhaul of our entire health care system being written in secret on a rapid time frame. That is not normal.

“We have a sordid confluence of the President’s business interests and his political power. That is not normal.

“The list could go on and on. And feel free to add your own to the comments section.
What concerns me even more than any of these items is the fact that they are largely being met by a shrug or excuses from most Republican elected officials. Even many Democrats seem overwhelmed and are inclined to let some of this just ride. That may be how politics works. But this is bigger. It’s about our nation.

“We are shifting the goalposts for our democracy. We are failing to be outraged by the outrageous because there is something even more outrageous that always seems to hit the news cycle. And that is dangerous.

“What gives me hope is we have had waves of abnormality in our country’s history. And we’ve had times when what we would consider now to be not normal, like segregation, was considered normal. What has centered and saved our country time and again is civic engagement. I believe that most people in this nation don’t think any of this is normal.

“And they could very well vote out those elected officials in both parties who are normalizing these outrages.”