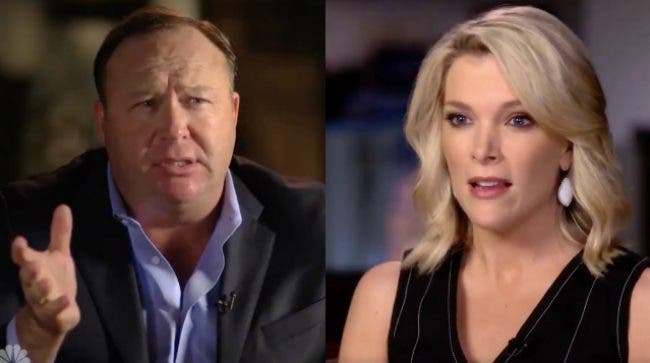 Following today’s swift backlash against NBC’s Megyn Kelly for giving a platform to far-right radio show host and conspiracy theorist Alex Jones, the executive producer of her show has finally spoken out.

Jones, host of the highly controversial radio show Info Wars, has come under heavy fire for his contentious positions on sensitive matters, such as denying the 2012 Sandy Hook massacre, which claimed the lives of 20 children and six teachers. Jones dismissed the massacre as a government hoax.

Kelly, for her part, has denied “legitimizing” Jones by giving him a primetime slot, claiming that her job is to “shine a light” on the conspiracy theorist.

Her executive producer’s suggestion that “it’s [their] job to interview newsmakers and people of influence no matter how abhorrent their views may be” is precarious at best. Would Kelly have interviewed Timothy McVeigh, the domestic terrorist who blew up the Federal Building in Oklahoma City? Or Adam Lanza, who perpetrated the Sandy Hook massacre? These were certainly newsmakers with abhorrent views. Offering them a platform – especially one through which they can reach millions of people – not only legitimizes, perhaps even glorifies, them as public figures, but perpetuates a message of hate that, frankly, is not worth disseminating.

Since starting at NBC, Megyn Kelly has given voice to some of the most dangerous and extreme figures on the fringes of politics. There is nothing that “shining a light” on Russian President Vladimir Putin or conspiracy theorist Alex Jones will reveal about their hateful positions that we don’t already know. Putin toyed with Kelly during her unfortunate interview with him last week; Americans don’t have high hopes for Alex Jones, either. Our nation is growing quickly tired of Megyn Kelly – who, for years, has espoused hateful rhetoric targeting Democrats as a shill for FOX News – letting some of the world’s most dangerous individuals into our living rooms on a weekly basis.