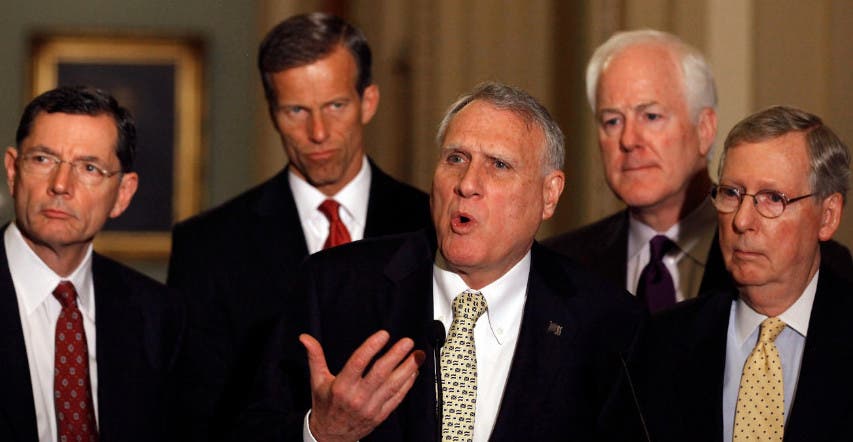 The Republicans in the Senate are gleefully working to strip healthcare from 23 million Americans by reworking the House’s indefensible Trumpcare bill. The worst part is that they know what they’re doing is actively harmful and vicious, so much so that they’re conducting themselves with zero transparency.

No versions of the new bill have been shared with the public, and as of today, the GOP is cracking down on reporters.  Reporters have been told that they can no longer film interviews with senators in the Capitol building hallways:

ALERT: Reporters at Capitol have been told they are not allow to film interviews with senators in hallways, contrary to years of precedent

CONDITIONS for any interview: Previously granted permission from senator AND Rules Committee of Senate

The new rules are a cowardly attack on the fair and open press. Government must be held accountable, and that can’t happen if they’re permitted to labor in darkness.

According to a Buzzfeed reporter, Republican Senator Tim Scott just gave the most absurd defense of the crackdown:

Incredible defense of cracking down on TV cameras from Senator Tim Scott: cameras could catch the PIN numbers of senators at ATM machines.

It seems Scott wants to restrict reporters’ access because he suspects some of them may secretly be arch-criminals looking to steal his bank balance.

A reporter for HuffPost couldn’t help but point out some additional irony:

Richard Burr used an ATM surrounded by reporters last week. Not only did he not get burnt, he left his card and reporters got it back to him

oh my god the chairman of the intelligence committee

So not only are the reporters honorable, non-thieving individuals, but the Republican head of the Senate Intelligence Committee can’t even be trusted with his own ATM card. Trump’s lackeys are at the point where their activities are so egregious that there is simply no way for them to mount a plausible defense for their decisions.

When an agenda is absurd, so too must be its justifications.