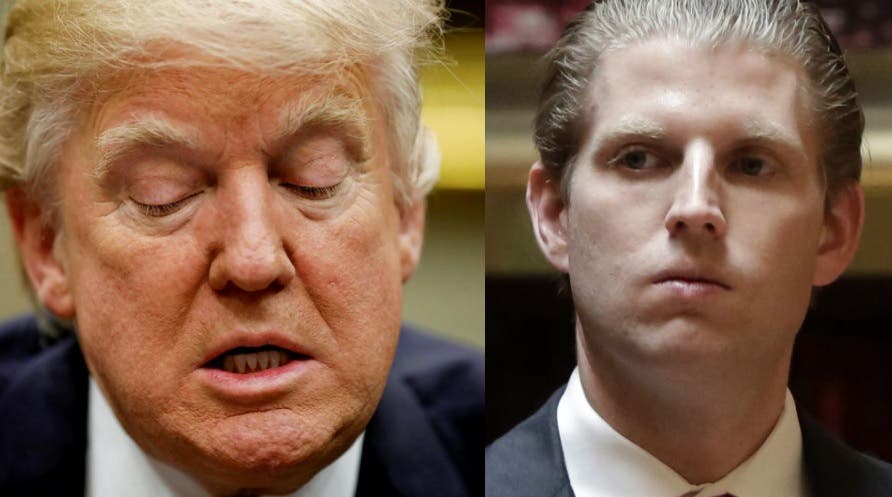 The Eric Trump Foundation scandal is escalating, as a Massachusetts lawyer has filed fraud and embezzlement charges with the New York Attorney General’s office – a complaint which the Attorney General can use to bring charges against the Trumps. (embedded below)

Nearly a million dollars was diverted from a charity for children with cancer into Donald Trump’s pocket, according to a new Forbes report which uncovered how money was being funneled between the father and son’s foundations and the Trump family’s for-profit businesses.

It goes without saying that it is very illegal for those who operate charities to engage in self-dealing or using charitable funds to obtain personal benefits. Attorney J. Whitfield Larrabee is a public interest lawyer and his submission to New York Attorney General Eric Schneiderman highlights a laundry list of financial impropriety including fraud and embezzlement.

In an interview, he told Occupy Democrats that:

“Donald Trump and Eric Trump took money that was promised to St. Jude Children’s Research Hospital and paid it to The Trump Organization. That was a fraud.

Donald Trump and Eric Trump took money from charities that they controlled and purchased paintings and luxury goods for themselves. Eric Trump hung a valuable painting that was donated to The Eric Trump Foundation in his living room. Donations to The Erik Trump Foundation were for children with cancer, not for one of the rich children of a billionaire.”

The Trump’s scheming included routing funds from the Donald J. Trump Foundation – which themselves were collected without proper registration – into the Eric Trump Foundation, who then paid the family business for use of facilities that they told donors had been donated for the use of charity.

Eric Trump’s foundation gave money to a series of charities which then gave the money to the family’s real estate and golf businesses.

The President cannot be indicted while in office, but with today’s announcement that Donald Trump is personally under investigation, there’s a rapidly increasing chance of his impeachment.

However, his son Eric stands a strong chance of landing a state-level indictment in New York, which is beyond the reach of the President’s power to issue pardons.

Sadly, the children of St. Jude are the ones who got scammed by this Trump con, but you can donate directly to them without any dodgy middlemen right here.