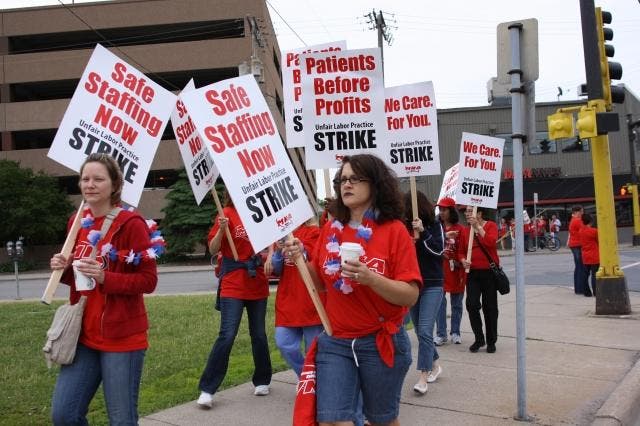 With all the negativity in American politics today, especially surrounding healthcare, it’s nice to be able to report some positive news once in a while.  That’s exactly what we have the opportunity to do today, thanks to some very generous nurses.

The Minnesota Nurses Association (MNA) announced today that they’re purchasing $2.6 million worth of medical debt that has been accumulated by about 1,800 families, freeing them from crippling bills in the process.  The MNA, which is Minnesota’s union for hospital nurses, is making the incredibly generous gesture on the 1 year anniversary of their successful strike that led to a healthy new contract for its members at five Minneapolis – St. Paul area hospitals.

The way they did it is also quite extraordinary.  The MNA partnered with a New York non-profit that helps people pay-off complicated and expensive medical debt. Together, they used the same laws and procedures that collection agencies exploit to find and purchase 3rd party debt on the cheap from banks and loan agencies looking to get those debts off of their books.

But instead of jacking up the interest and compelling debtors to pay more by threatening to ruin their credit or take legal action like collection agencies do, the MNA just forgave the debt.

“Nurses are happy to allow these families to be free of their debt,” said Mary Turner, MNA president, as quoted in the Association’s press release announcing the deal.  “They’ve had this medical debt hanging over their heads for two years or more. It’s cost them their credit, pushed them toward bankruptcy, and hurt them in so many ways.”

Lori Swanson, the Attorney General of Minnesota, added, “Medical bills are now the number one reason people are contacted by debt collectors. Even people with health insurance face unpaid medical bills due to the very high deductibles in many insurance policies.  The Minnesota Nurses Association is generous to have relieved people from the weight of this debt.”

On the one hand, this very noble display of charity should be celebrated, and the Minnesota Nurses Association deserves every ounce of praise we can generate.  But on the other hand, why was this even necessary?  Why is healthcare debt even a thing? We live in the richest, most power nation on earth, and it’s shameful that it takes the generosity of a union for middle class healthcare providers to save families from crippling medical bills.

So praise these nurses, yes, but also demand that lawmakers protect less fortunate families by expanding ObamaCare and moving us toward a single payer system like most of the rest of the civilized world enjoys.