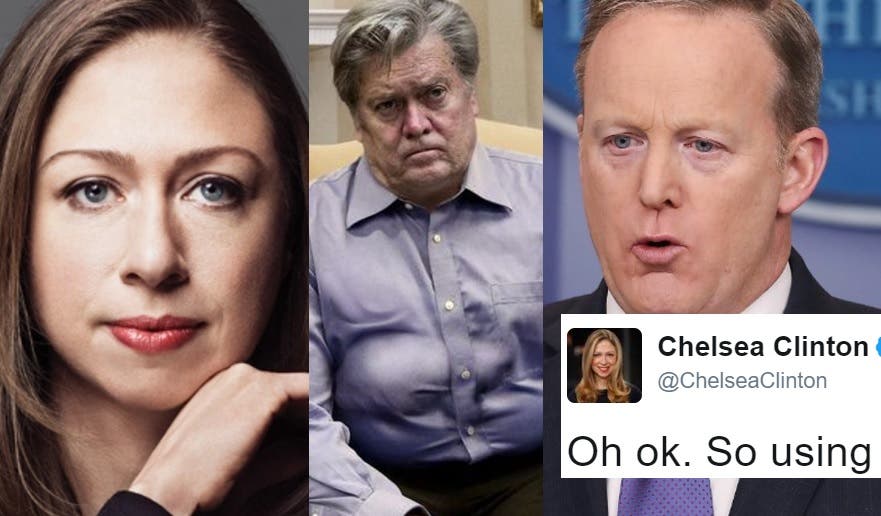 Battered by interminable scandal and enraged at the constant stream of embarrassing leaks to the media, the Trump White House has gone to the proverbial mattresses and shut down almost all communications with the outside.

Forgoing the usual press briefings, Press Secretary Sean Spicer is holding off camera “gaggles.” When asked as to why that decision was made, Chief Strategist Steve Bannon quipped that it was because “Spicer was getting fat.”

This did not sit well with former Secretary of State Hillary Clinton’s daughter, Chelsea, who took to Twitter to express her displeasure with the use of fat-shaming to excuse the Trump administration’s lack of transparency.

Oh ok. So using fat shaming to avoid answering questions about increasing opacity. Got it. 2017. https://t.co/RbUSc6ipZS

Much of the internet greeted Bannon’s announcement with amusement since the bloated and decaying white nationalist perpetually looks like he’s just emerging from a two-week bender and is not in any position to be critiquing the physical appearance of his colleagues.

It shouldn’t come as a surprise that the Trump administration is trying to brush off the very serious deviation from protocol with something as stupid as a fat joke, since Trump himself is a notorious fat-shamer – but it does speak to how little they care about the media’s right to ask questions as to why he is making the decisions he’s making and how they’re going to be carried out.

The American people have a right to know what our government is doing, but these days it seems nobody – not Trump nor Republicans in Congress – is interested in being transparent with the people they ostensibly represent.