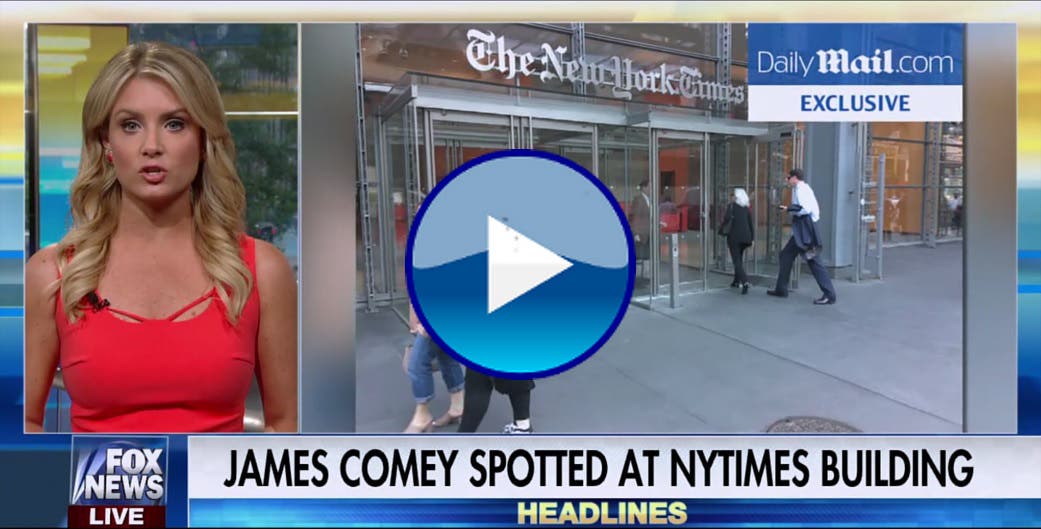 The conspiracy mills are spinning overtime at the official propaganda arm of the Trump administration, FOX News. Their latest target is former FBI Director James Comey, who they are desperately trying to vilify and discredit in light of his damning testimony about the President’s attempts to obstruct the FBI’s investigation of his former National Security Adviser, Lt. Gen. Mike Flynn.

Yesteray, James Comey was seen at the New York Times building with his wife. What could he have been doing there? Was he spinning a new set of liberal anti-Trump lies for the FAKE NEWS MEDIA to feed to the sheeple? FOX News isn’t saying he wasn’t.

Jillian Mele opened the segment by announcing “the New York Times gets a special visitor. The Daily Mail got these pictures of former FBI Director James Comey stopping by their office in Manhattan. He reportedly spent three hours inside.”

The Trumpcoats immediately jumped to conclusions, even though he is clearly not hiding and is walking, into a building, with his wife, in broad daylight. The man is nearly seven feet tall; he couldn’t have tried to hide if he wanted to.

BUSTED: #Comey trying to sneak into the @nytimes tonight without the world knowing he's a big rat. I don't think so, buddy. Spies everywhere pic.twitter.com/E2kDapjB68

All those “spies” – really Rupert Murdoch’s paparazzi hyenas from the UK’s Daily Mail – caught Comey going to a charity event for abused children at the Covington & Burling law firm, according to the New York Times’ Maggie Haberman.

Comey didn't visit NYT newsroom. A person close to him said he and wife went to ceremony for CASA at Covington & Burling in NYT building.

But sadly, the truth won’t get nearly as much media play as FOX & Friends’ appalling conspiracy theories. If Steve Doocy would stop injecting hair gel into his follicles and sexually harassing his co-hosts long enough to do the most cursory of investigative reporting before simply running with wild speculation, he wouldn’t have had to begrudgingly and half-heartedly walk back the allegations later:

h/t to the fine folks at Media Matters who force themselves to watch FOX News all day.