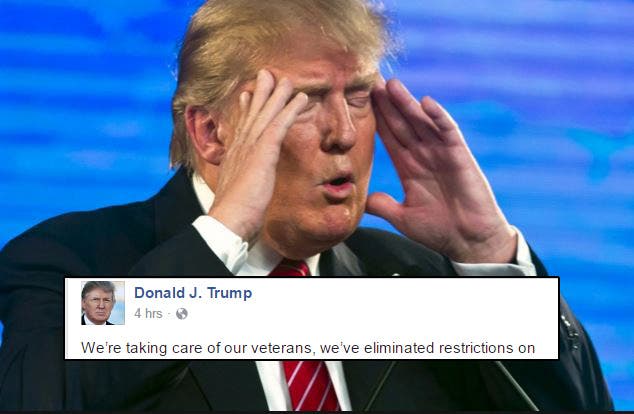 With Trumpcare Vote Looming, Here Is What Trump Is Doing Right Now

Once again, President Trump’s reckless social media ‘winning’ has gotten him into some trouble. He didn’t lie about “wire tapping” to influence an investigation, or about “tapes” to intimidate a witness.  Nothing trivial like that this time.

But if the President’s social media statements speak for themselves, as the White House communications team constantly reminds us, then it appears President Trump may be preparing to overturn nearly a century of child labor laws, as enshrined in the Fair Labor Standards Act of 1938.

On President Trump’s Facebook page, an image was shared that featured him at yesterday’s rally in Iowa, with this caption:

“President Trump’s Rally in Cedar Rapids, Iowa… And We Are Putting Our Minors Back To Work.”

With unemployment reaching near-record lows, it’s unclear exactly what sector America’s millions of youth would be employed in.  Perhaps he plans to replace all the undocumented agriculture workers he’s deporting with child labor.  Kids love the outdoors.  Maybe they can pick some lettuce while they’re out there.

Or maybe this new initiative is part of the larger Republican war on participation trophies and safe spaces.  Why risk getting stuck in the weeds of those debates when you can just bypass them altogether by forcing America’s youth to work 40 hours a week?  No time for sports or preparing for admission at snowflake universities.  Problem solved.

UPDATE: It appears the President’s image contains a typo, and the word “minors” was supposed to read “miners.”  Honest mistake, we suppose, one that would have tripped-up even the most attentive and covfefe of politicians.

To America’s children, we’re sorry if we alarmed you.  You may return to your safe spaces.   You can double check the image of the Facebook post below, just to be sure.

Putting our "minors" back to work. pic.twitter.com/un1MvkWKtT