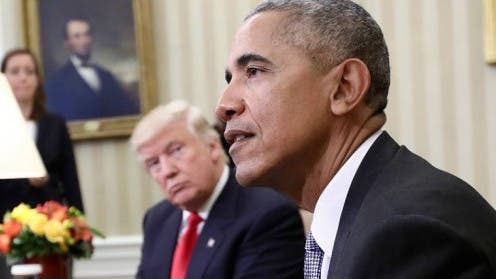 Trump went golfing today at the Trump National Golf Club in Potomac Falls, Virginia, marking his 31st day on the golf course since becoming President. After 22 weeks in office, Trump has officially surpassed Barack Obama, who had golfed 28 times in his entire first year as President.

Trump is again at his Virginia golf club, his 31st day at one of his golf courses since becoming POTUS 22 weeks ago https://t.co/GgbRVGrTAl

Trump, who began his “political” career by constantly castigating and trolling President Obama, has long compared himself to his predecessor. While he has fallen short on nearly every other measure – from approval rating to passing meaningful legislation – the frequency of golf outings rests safely in Trump’s corner.

This is already Trump’s second day at his Virginia golf course, although yesterday’s visit was reportedly limited to “taking meetings and eating lunch.” That being said, a group of people wearing golf attire had filed into Trump’s motorcade, and photos later surfaced of the motorcade arriving at the golf club.

If Trump did hit the links yesterday, this would not be the first time he used the pretense of meetings to lie about his schedule.

On March 25th, while the White House assured the press pool that Trump was in “meetings,” he was photographed wearing golfing attire and, later, in a golf cart on the green. The very next day, the White House claimed Trump attended three more “meetings,” while Instagram posts surfaced showing him watching golf on television.

No details from @WhiteHouse on today's @POTUS "meetings." Attire and mode of transport suggest more leisurely pursuits at his golf course. pic.twitter.com/A8SsM415Js

Trump also got himself into hot water last week when a video showing him recklessly driving across the green – the most delicate part of a golf course – in his golf cart went viral.

Trump has predicated his entire political career on surpassing former President Barack Obama and, for once, he has succeeded. Although perhaps not in the way that he had hoped.