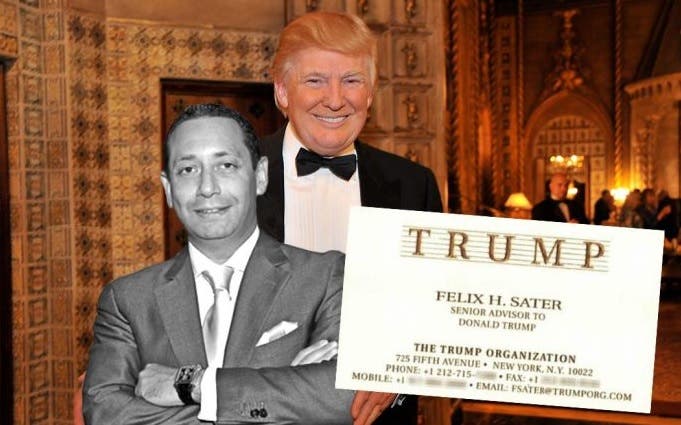 Russian mobster Felix Sater ran Bayrock, the developer who funded the Manhattan Trump-branded condo-hotel project with money from the former Soviet state of Kazakstan and allegedly with Putin’s cash from banks in Iceland.

Felix Sater made headlines recently by sending extortion threats to some of Trump’s former partners from Kazakstan over the SoHo deal. Now, the Financial Times reports that Sater – who told Russian media that he advised the Trump campaign – has decided to cooperate with fraud investigators. FT wrote:

Mr. Sater has now agreed to co-operate with an international investigation into the alleged money-laundering network, five people with knowledge of the matter said. The co-operation has included working with a team of lawyers and private investigators pursuing civil cases across three continents, the people said. Mr Sater declined to comment.

Felix Sater, a Russian-born dealmaker with organised-crime connections who worked on property ventures including Trump Soho in Manhattan, has attracted attention in recent months as efforts continue to chart the links between the US president’s circle and moneymen from Russia and its neighbours.

Mr. Trump’s Kazakh connection also adds to the emerging picture of the president’s enigmatic relationship with the former Soviet Union. Questions about that relationship have dominated the early months of his presidency as multiple investigations examine claims his campaign colluded with Russian attempts to manipulate the 2016 presidential election.

It is unclear how much money has flowed from the alleged Kazakh laundering scheme to Mr Trump. Title deeds and banking records show that in April 2013 shell companies controlled by the Khrapunovs spent $3.1m buying three luxury apartments in Trump Soho from a holding company in which Mr Trump held a stake.

Private lawyers working on the case claim foreign investors may have used their profits from corruption to buy multiple units in the Trump’s most conspicuously failed project in New York City. The Trump SoHo collapsed into a pile of fraud, contract and foreclosure lawsuits.

Fearing criminal prosecution, Trump settled one of the civil lawsuits in 2011, and the New York Times revealed that fear to be well founded. In fact, the President’s lawyers demanded that disgruntled consumers promise to stop cooperating with prosecutors to get paid as they reported last year:

And hovering over it all was a criminal investigation, previously unreported, by the Manhattan district attorney into whether the fraud alleged by the condo buyers broke any laws, according to documents and interviews with five people familiar with it.

The buyers initially helped in the investigation, but as part of their lawsuit settlement, they had to notify prosecutors that they no longer wished to do so. The criminal case was eventually closed.

If that wasn’t all bad enough, Sater’s former partners in Bayrock, are still suing for unpaid wages from the Trump SoHo deal. Trump gave Bayrock an arrangement sell his real estate brand around the world according to Forbes, including a proposed, but never materialized Trump Tower Moscow.

Trump is so terrified of talking about his involvement with Felix Sater, that lied in a sworn deposition – in a video embedded below – swearing that he wouldn’t even recognize the Russian-American emigre.

Felix Sater spent a decade working as an informant for the FBI while working with Trump, at Trump Tower, after being convicted of a felony in secret for participating in a $40 million dollar Wall Street pump and dump penny stock scam with the Italian mafia. More recently, the Sater was caught in bizarre a diplomatic back channel operation to Russia with Trump’s personal lawyer, Michael D. Cohen, who himself recently hired a criminal defense lawyer.

Sater’s plan to work with the now-fired National Security Advisor Gen. Flynn fell apart, and last month he became the first high-ranking member of Trump’s inner circle thought to become a cooperating witness against the President.

Republicans elected Donald Trump because they wanted him to run the country like one of his businesses; however, any Trump venture seems to always involve a lot of lies, foreign cash, an underworld connection and a tangle of lawsuits by people he’s harmed along the way.

That’s exactly what the Trump Presidency has become in just 167 days; a typical Trump train wreck.

Watch Trump lie under oath about his relationship with Sater: