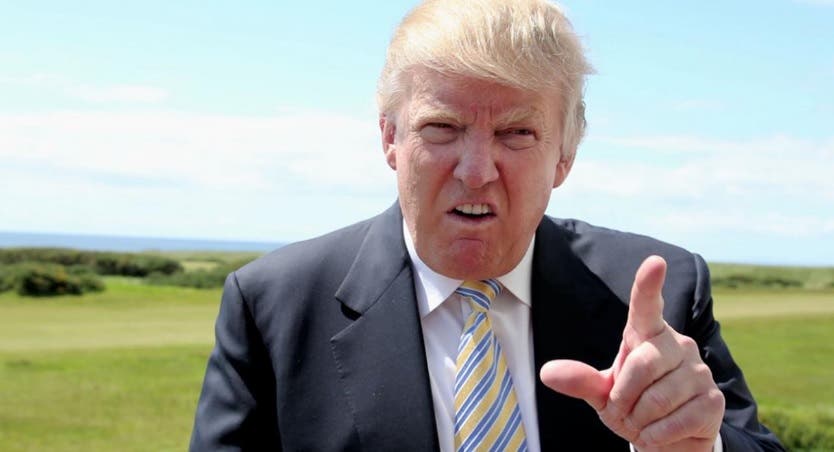 President Trump just got caught using the EPA to make a buck at his golf courses, and the advocacy group Free Speech for Free People (FSFP) is asking for the public’s help to prevent an environmental catastrophe.

Trump issued an executive order in February which would roll back part of the Clean Water Act by redefining what’s covered by the law.

It just so happens that twelve golf courses owned by Trump and 161,000 acres of streams and wetlands would be left unprotected by the Clean Water Act.

Public interest lawyers at the FSFP got involved because President Trump’s order violates a clause in the Constitution forbidding America’s top lawmaker from self-enrichment:

The issue that has Free Speech For People wading in here is that the benefits that Trump’s golf courses stand to gain from his order to rescind the rule run afoul of the Domestic Emoluments Clause of the U.S. Constitution. The clause provides:

“The President shall, at stated Times, receive for his Services, a Compensation, which shall neither be increased nor diminished during the Period for which he shall have been elected, and he shall not receive within that Period any other Emolument from the United States, or any of them.”

The Domestic Emoluments Clause explicitly prohibits the U.S. government, and any of the states, from conferring additional benefits upon the President, and there can be no doubt that this proposed rule would constitute a huge hand-out to Trump’s golf courses at the expense of the health and safety of the nation.

The EPA just started accepting public comment on the proposed rule which would exempt Trump’s golf resorts from Sections 402 (known as NDPES) and 404 (the special permit program) of the Clean Water Act. Each has a role in preventing water pollution by commercial interests.

FSFP prepared a comment that readers can transmit, along with their own, personal input about why the President shouldn’t be allowed to reap financial rewards from his administrative powers. It reads in part:

President Trump should not be allowed to use his authority or his influence to enrich himself or his organization by repealing or amending regulations that apply to his businesses, properties, or other assets. The Trump Organization owns twelve golf courses that are subject to the Clean Water Act and that would be affected by the proposed change to the definition of “waters of the United States.” There is no doubt that rescinding the current definition of “waters of the United States would confer a major economic benefit on the Trump-owned golf courses.

President Trump just got sued again this week in a Florida federal court, because he’s profiting directly from government payments to his golf properties under the very same domestic emoluments clause cited in this EPA action.

President Trump has frequently shown that he’s more interested in cashing in on his office, than doing anything productive.

Now, Trump’s plan to use the EPA to help his golf courses make money by damaging America’s supply of clean water in violation of the domestic emoluments clause can only be averted if, and only if there are a great many public comments against the EPA making bad environmental policy just to enrich the President.