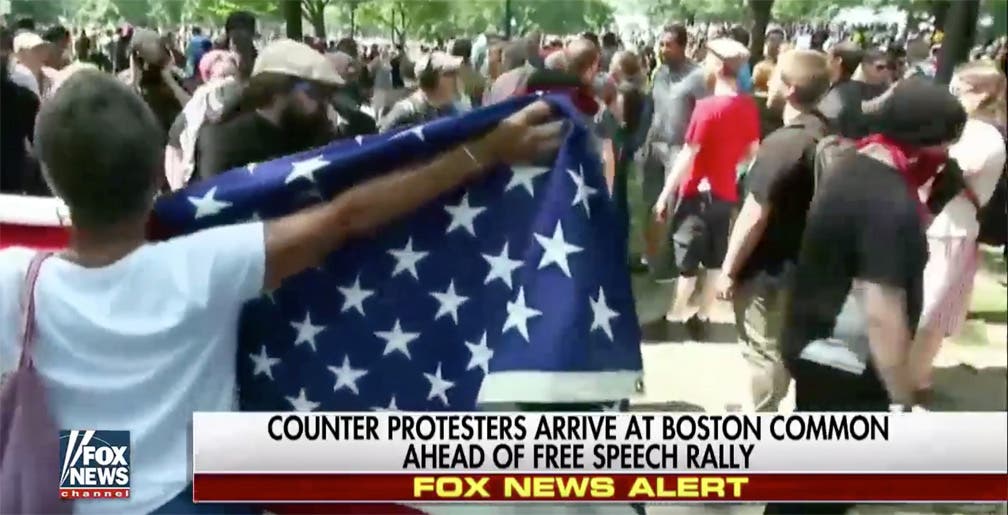 FOX News tried to make a scandal out of an altercation between a woman holding an American flag and what appears to be a leftist protester marching through a park.  The scene was captured by a video crew in Boston covering the dueling rallies there today.

A FOX News host narrated the scene as they played it for viewers, saying:

“That’s assault, what just happened there, and so you already have people who think they’re able to violate the free speech rights of others and break the law.  You can’t grab something out of someone’s hands and drag them along on the ground.  That’s their property and that’s assault.”

Clearly, the Trump-supporting cable news network wants to paint a picture of left wing ‘AntiFa’ protesters attacking a patriotic woman with a flag.  The problem, however, is that the play-by-play didn’t exactly match the unfolding scene.

A confrontation did occur, and a male protester is seen clearly yanking the flag out of the hands of a woman and scurrying off with the woman in tow.  The woman held on and chased him but then tripped and fell when the protester let go a few steps later.

The women then gets up and continues to chase the protester, cameras following close behind.  Finally, clearly shaken, she stops to gather herself.  That’s when other protesters approach her to comfort and assist her to the ground to rest – something the FOX News hosts failed to point out to their viewers.

Further, if you watch closely, you can see clearly that the confrontation was initiated, perhaps unwittingly, by the woman.  While holding the flag with both hands, her arms spread wide, she walked into the path of a random protester, and the two bumped into each other.  The protester then can be seen taking a swipe at one of the woman’s outstretched arms.  The woman then takes a swipe at the protester in return, and that’s when the protester yanked the flag.

Also, it’s not clear the woman and protester were on opposing sides.  These two could have both been on site to protest the expected gathering of White supremacists.  But because of the optics of a somewhat older white woman holding a flag caught on camera in a confrontation with a younger male antifa-looking protester, they went with the story.

The scenes were unfortunate, and the young male protester should have just left the older woman alone.  But FOX News’ sensationalizing this story based on optics alone is everything that’s wrong with journalism.

You can see the video and hear the play-by-play below and decide for yourself.