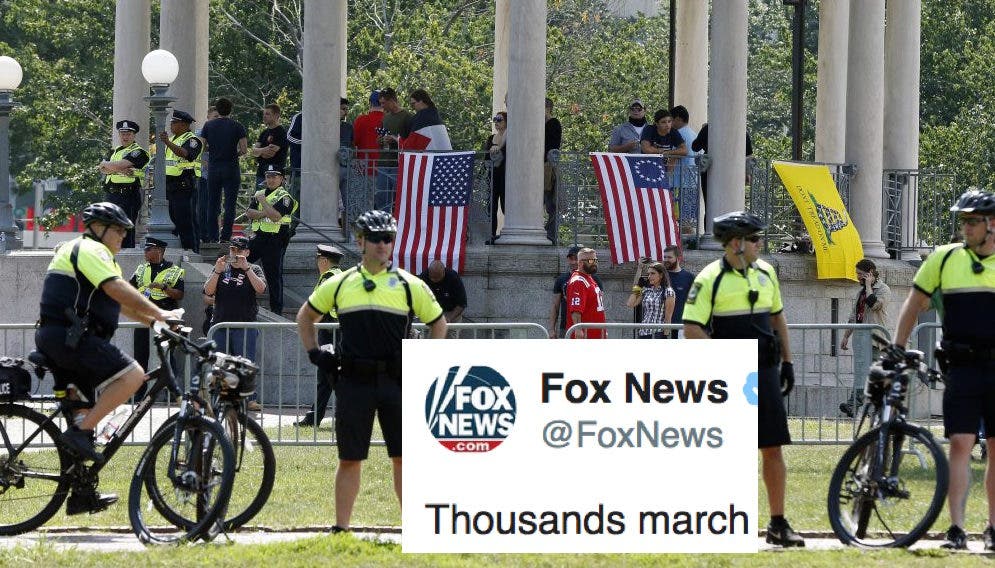 Had Fox News been concerned about journalistic ethics or even basic honesty, they might have considered the headline, Thousands march through Boston against ‘Free Speech Rally.’ Of course, drawing attention to the fact that 15,000 people showed up for a peaceful protest against the hateful rhetoric that they and Trump have incited is decidedly against their agenda.

The article even goes on to dwell on the fact that approximately 10 out of 15,000 people were arrested during the peaceful demonstration:

“Boston’s demonstrations were mostly peaceful, however there were some confrontation between protesters including when a person dressed in all black grabbed an American flag out of an elderly woman’s hands, pulling her for several feet before she stumbled and feel to the ground.”

To be clear, this is Fox News criticizing one unidentified person among 15,000. Perhaps their journalistic efforts would be more fruitful if they spent as much time castigating the literal neo-Nazi, Klansmen, and white supremacists marching through the streets as they do on “one person dressed in all black” who “grabbed an American flag out of an elderly woman’s hands.” Or, in an even more unlikely scenario, they’ll give due reporting to Heather Heyer, the 32-year-old who died at the hands of a neo-Nazi who plowed his car into a group of counterprotestors last weekend in Charlottesville, Virginia.

Trump and his mouthpiece conservative news network may be twisting themselves into pretzels to spin this story, but their exhaustive efforts are only serving to exacerbate their racist agenda.