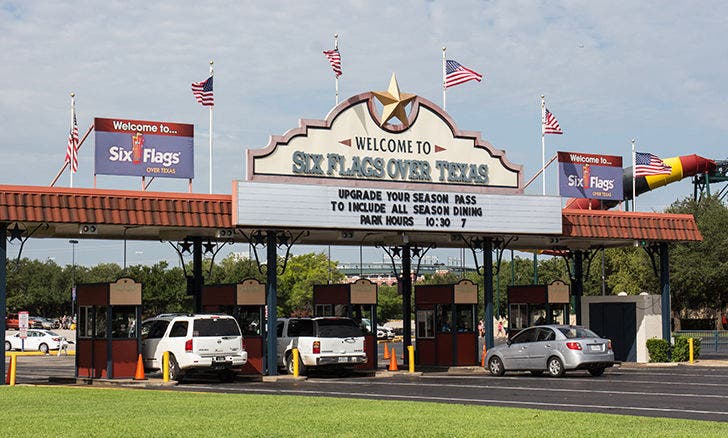 On the heels of the abhorrent white supremacy rally that took place in Charlottesville, Virginia last weekend and left 32-year-old Heather Heyer dead after a neo-Nazi plowed his car into a group of counterprotestors, Six Flags Over Texas, a theme park near Dallas, has reversed a longstanding decision to remove the Confederate flag from its entrance. Six Flags spokeswoman Sharon Parker explained, “At Six Flags Over Texas we strive every single day to make people happy and to create a fun, thrilling and safe family friendly experience for our guests. We always choose to focus on celebrating the things that unite us versus those that divide us. As such, we have changed the flag displays in our park to feature American flags.”

The flags representing the Confederate States of America, which had been on display at the park’s entrance for 56 years, since 1961, were changed to American flags as of this weekend. Two other Six Flags theme parks – Six Flags Fiesta Texas in San Antonio and Six Flags Over Georgia near Atlanta – had also displayed Confederate flags, which have since been replaced amid public outcry.

The decision was a reversal from its stance that was reiterated as late as Friday that they would not take down the Confederate flag, citing its difference from the Confederate battle flag.

Yet after the vile acts of hate that occurred in Charlottesville at a rally that was tacitly endorsed by Trump, Six Flags swiftly reversed course. While the President may have been hoping to shore up support for these racist fringe groups, his misguided comments have had the unintended side effect of shoring up support in opposition to them.