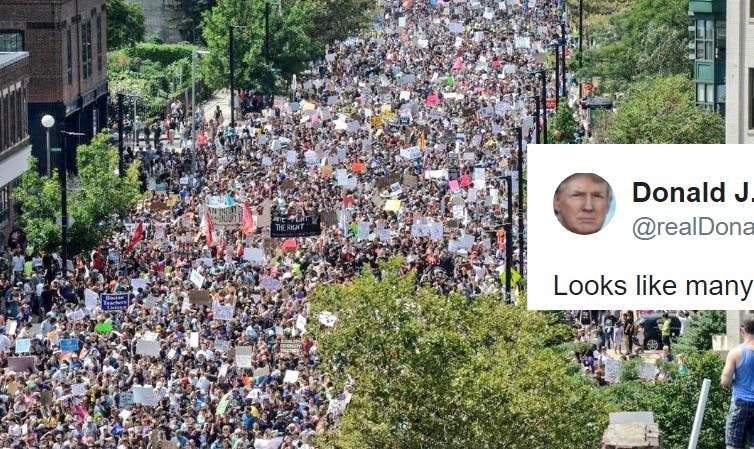 Once again, the President is going out of his way to defend the white supremacists and the neo-Nazis of the “alt-right” by slandering the tens of thousands of people who took time out of their day to show a handful of racist chuds that their awful ideas aren’t welcome in the city of Boston.

The police went out of their way to defend the Nazis, escorting them through the crowds and keeping the antifa away from them, the living manifestation of white privilege protecting the racists from the consequences of their actions and words.

Does this look like an anti-police protest to you?

Don't know why, but this photo just made me tear up. Breathtaking Boston, just breathtaking. Thank you. ❤️ #RESIST #NoHate #Love pic.twitter.com/xlvX3tzIGv

If there’s one thing I think when I see tubas, it’s anti-police violence.

A full band is bringing music to the counter protest in Boston pic.twitter.com/EhM8VbAyUY

Is “red sox” some kind of anti-police code word like the ones used by the hippity-hop rappers?

The anti-police agitators are even consorting with heretics and devil’s agents, which everyone knows is absolutely haram. By conflating the protesters the mythical anti-police agitators that the right-wing invented to use as scapegoats and boogeymen, he’s laying the groundwork for framing them as enemies of the state and by extension, the rule of law and his presidency, justifying the repression and violence he may one day deploy against massive crowds protesting his administration.

By calling them “anti-police” agitators, he’s also implicitly linking them to Black Lives Matter and other groups demanding comprehensive reforms in our police forces and an end to the epidemic of summary executions of minorities by police forces.

40,000 showed up to protest today. 20 people were arrested. Hardly “agitators.” The President is showing his disdain for our right to assemble – and proving once again that he truly is a white supremacy president.