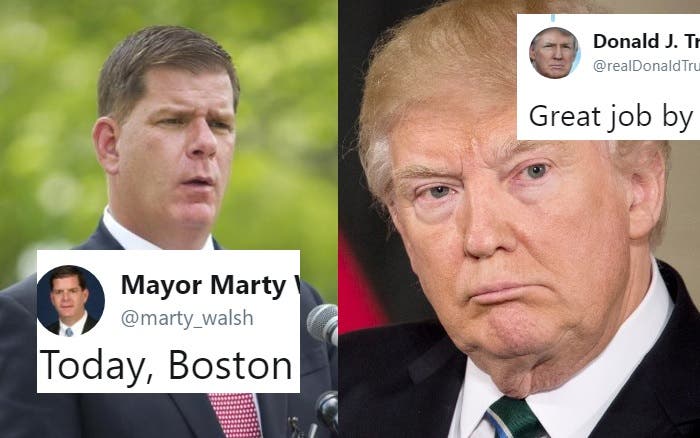 On the heels of today’s “Free Speech Rally” in Boston in which as many as 40,000 peaceful counterprotestors showed up to drown out the voices of hate, Trump decided to spin the demonstrators as “anti-police agitators.”

In a desperate attempt to align himself with the Boston Police Department and Mayor Marty Walsh, he tweeted a transparent commendation of both.

Mayor Walsh, however, was in no mood to kowtow to the President, nor align himself with the very man responsible for instigating and emboldening the hateful rhetoric that could have upended Boston today as it did Charlottesville.

After the heinous attack in Charlottesville in which a neo-Nazi plowed his car through a group of counterprotestors, killing 32-year-old Heather Heyer, Trump opted to lambast “both sides,” rather than denouncing literal neo-Nazis and white supremacists in attendance. In failing to denounce white supremacy, the President has positioned himself unequivocally on their side. That stance, however, has no place in Boston.

While Trump has opted to pander to the most racist and xenophobic in his base, Mayor Walsh just gave him a lesson in true leadership.