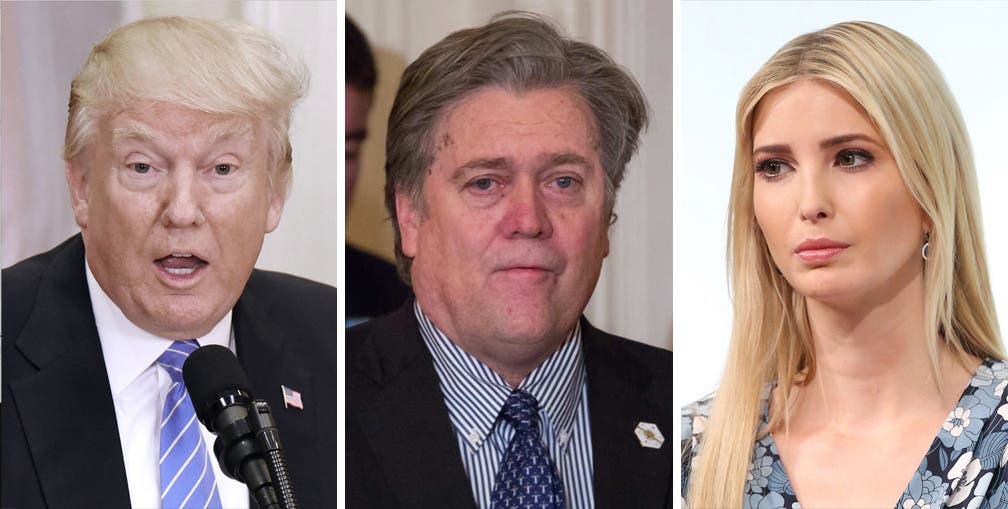 The ink on Stephen Bannon’s resignation letter has yet to dry, and already he’s back at Breitbart News – and he’s on the attack. Two stories published Sunday on his alt-right website make it very clear that the disgraced architect of Trump’s victorious campaign and the brains behind the economic nationalist agenda has scores to settle in the White House.

First came a front page hit piece on National Security Advisor H.R. McMaster, the man widely accused – or credited – with nudging Bannon out of the seat on the National Security Council he controversially engineered for himself.  That was the first first crucial demotion Bannon suffered.

The second shot was fired Sunday afternoon, and it was aimed squarely at another White House rival: Ivanka Trump, the President’s daughter. In an article titled, “Report: Ivanka Trump Helped Push Steve Bannon out of the White House,” Breitbart cites a Daily News report that references “Washington Sources” confirming that the President’s daughter convinced him to push  Bannon out because of his ties to the alt-right and his coddling of anti-semitic rhetoric.

Ivanka and her husband and fellow presidential advisor, Jared Kushner, are both devout Jews, and the timing of Bannon’s resignation points to his alleged anti-semitic links as central to the move.

President Trump failed to immediately and unequivocally place the blame for the violent protests in Charlottesville, Virginia on August 12th on white supremacists.  After appearing to correct the mistake on Monday, he reverted Tuesday to his default position blaming both sides, and even going further to say there were some ‘fine people’ among the Nazi rally attenders.

Stephen Bannon has long been seen as an enabler of the rampant white supremacy on the alt-right – first at Breitbart, and then from his position inside the White House.  Cultivating and mobilizing them was seen as one of the secrets of Trump’s victory in November.

And so the President’s failure to condemn white supremacy after Charlottesville, and his later statements pushing a false equivalency with those protesting them, was blamed on Bannon’s influence.  If someone needed to take a fall for the botched response to Charlottesville, it was always going to be Bannon.

The attacks on Ivanka Trump and H.R. McMaster so soon after his departure, however, are an attempt to paint an entirely different picture.  Bannon’s unceremonious exit marks a massive defeat for the entire Alt-Right, and Breitbart wants their readers to think that “globalists” like McMaster, Ivanka, and Jared are to blame for the loss of their hard won access to the White House.

In the first interview Bannon gave after word of his resignation leaked, he promised he would be waging “war” against everyone opposed to Trump’s alt-right agenda.  Who knew one of his first targets would be the President’s daughter?