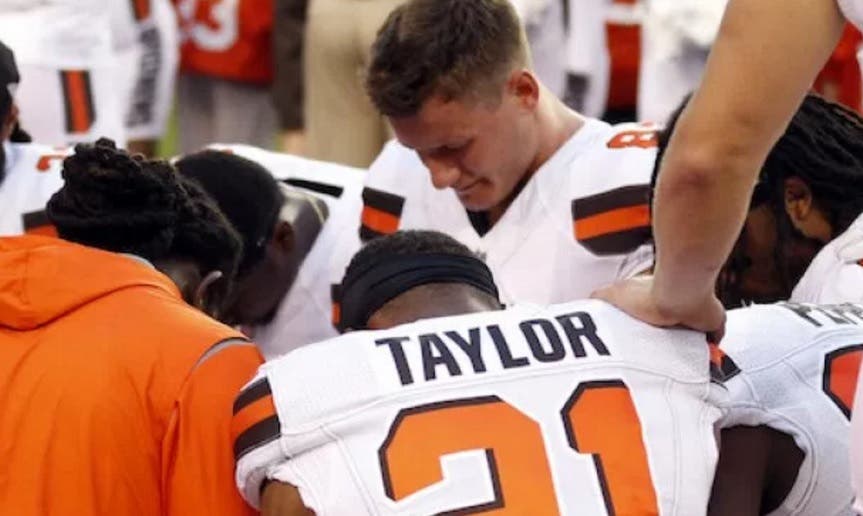 Last year, San Francisco 49ers quarterback Colin Kaepernick started a firestorm of controversy in the National Football League when he kneeled for the pregame national anthem to protest the summary execution of black Americans by police officers, who are by and large promptly cleared of all wrongdoing for the murders.

Kaepernick may now be a free agent and blackballed by the old, crotchety rich white men who own the League’s 32 teams, but his actions have started a movement that is still going strong.

In the most dramatic moment of last night’s otherwise unexciting exhibition match, Seth DeValve, a tight end for the Cleveland Browns entering his second NFL season, became the first white NFL player to kneel in solidarity with his black comrade.

DeValve, who is happily married to a black woman, told ESPN that the recent white supremacy rally in Charlottesville, Virginia and the White House’s tacit endorsement of white supremacist sentiments inspired him to take a stand.

“I myself will be raising children that don’t look like me, and I want to do my part as well to do everything I can to raise them in a better environment than we have right now. So I wanted to take the opportunity with my teammates during the anthem to pray for our country and also to draw attention to the fact that we have work to do.”

Dozens of black NFL players have knelt during the first two weeks of preseason, and DeValve’s brave decision will hopefully prompt a wave of white players heeding the call of Seattle Seahawks star defensive end Michael Bennett to help change the conversation.

“It would take a white player to really get things changed. Because when somebody from the other side understands and they step up and they speak up about it … it would change the whole conversation.”

As the ugly face of white supremacy rears its ugly head once again across our nation and cops continue to kill the citizens they swore to protect and serve at a staggering rate, this is a conversation we need to be having. We applaud these players for risking their jobs and the ire of their coaches to take a political stand against the institutional racism in our police forces and our government.

The stance is particularly poignant when made by the athletes of a sport which largely centers around young black males sacrificing their bodies for our entertainment.