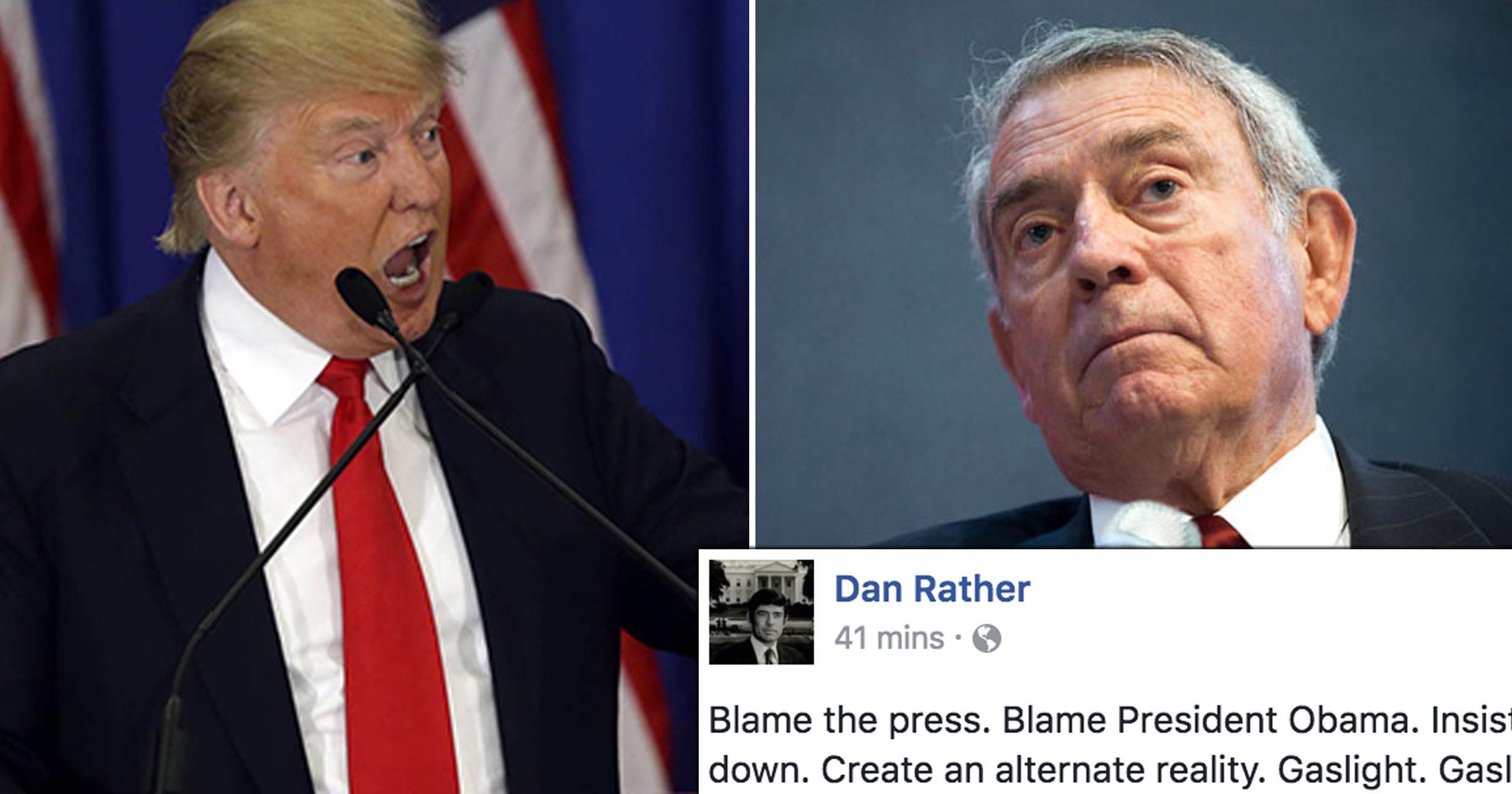 Tonight, President Trump held a campaign rally — three years in ahead of his election.

Absurd though that may sound, the thing that most stunned legendary anchor and journalist Dan Rather was the incessant complaints and excuses he heard from the President of the United States.

Rather took to Facebook with the below post, bringing his usual insight and an important perspective into the mess that was Trump’s rally:

The speech that President Trump gave tonight was not the teleprompter-confined President of last night’s speech on Afghanistan. He was the martyr to an unfair witch hunt. His words after Charlottesville were in reality healing – if the press would just tell the truth. He was misquoted and taken out of context. He has drawn the battle lines to divide a nation between his “us” and the “them” of the others. And he basks in the swagger.

Nevermind all the critics outside of the press, the CEOs, the GOP officials who have questioned his mental stability, and the global condemnation.

But why does he attack the press, as “bad people” who “don’t like our country?” “Sick people?” Why does he say “the only people giving a platform to these hate groups is the media and the fake news?” CNN, the New York Times, and the Washington Post is the enemy. Fox News and Sean Hannity are the good guys.

This bombast is because the press is a check on power. The press is performing its constitutional responsibilities. The investigative reporting has drawn blood.

The forces of political gravity that have tethered his agenda to reality went unstated. So he attacks sanctuary cities. He touts a wall that is apparently being built, and over which he is willing to apparently shut down the government. He hinted at a pardon for the controversial Sheriff Joe Arpaio. “Sheriff Joe can feel good.”

He keeps fighting the battle over healthcare, unable to let go of a stinging defeat. Over and over he said “one vote away…” fully conscious that one of those key votes that doomed his healthcare effort was the senior senator from Arizona, John McCain. “I won’t mention any names. Very presidential.” And then he attacked the junior senator from Arizona, Republican and Trump critic Jeff Flake, without mentioning his name either. But the tenor was clear. Mr. Trump was ready to attack any GOP senator who has the temerity to go against him.

This was Trump as candidate, uncaged, unscripted, unabashed, and frankly unhinged. The crowd got to chant “lock her up” to the name of Hillary Clinton and cheer a president who claims that he has accomplished more than any president at this point in a term (nevermind reality). He was playing to the home crowd. But there is a much bigger world out there, no matter the picture Mr. Trump may wish to paint.