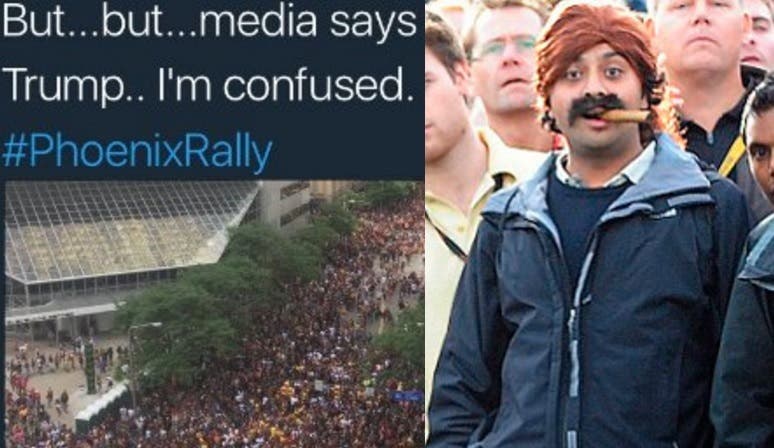 Trump Called Two Republican Senators To Rage Over Russia. They Just Revealed Why

Every time there’s a Donald Trump rally, rabid Trump fans begin frantically sharing pictures of the massive crowds waiting outside to get in.

Last night’s debacle in Phoenix was no different.

But as it turns out, those photos are from the Cleveland Cavaliers victory parade – and they fall for them every time. Even supposed “real news” media sites (according to Trump, anyway) like Breitbart and the Gateway Pundit fell for it in their eagerness to prove how popular Trump was.

The trend was started by prankster and Ohio sports devotee Chris McNeil, who has earned a name for himself with his successful trolling exploits. He’s been doing this since August of last year, when

“People get blinded by their own agendas easily I’ve learned,” said McNeil to the Daily Beast. “Even the comments from my followers give it away. I don’t try and keep up the muse too hard. That’s what makes it funny to me.”

Now he and his followers do it on a regular basis – like this impromptu wedding at a “Trump rally” that was actually a very poorly attended football game at the stadium of the Cleveland Browns.

“There are a lot of important things politicians do while in office, then there are the dumb things people get upset about online—like crowd sizes. I wish we would all do more laughing about the dumb stuff and coming together on the important stuff” says McNeil.