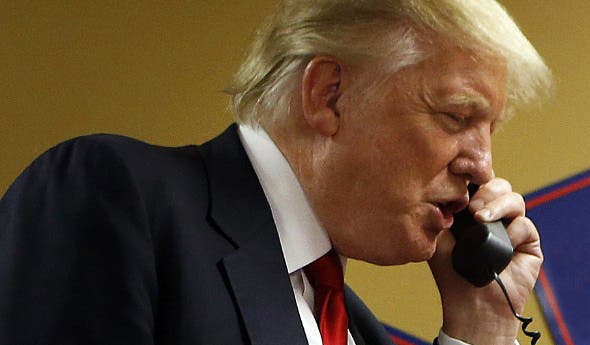 In public, President Trump and his defenders in Congress and in the media insist that any story suggesting his presidential campaign colluded with Russia is “fake news” and a “ruse.”  It’s little more than a conspiracy theory cooked-up by Hillary Clinton’s camp to explain her historic defeat, they maintain, something to distract viewers and readers from all the winning Trump is doing.

In private conversations, however, the President can’t seem to talk about anything else BUT Russia.  According to a bombshell report in Politico Wednesday, President Trump has made multiple phone calls to members of congress over the summer months to inquire about a series of bills designed to box him out of critical foreign policy directives dealing directly or indirectly with the Kremlin.  “It seems he is just always focused on Russia,” one senior GOP aide told Politico.

Both houses of congress overwhelmingly passed legislation that imposes harsh sanctions on Russia, but with a twist.  The same legislation also places unprecedented restrictions on the President’s ability to enforce those sanctions, something to which the White House has strenuously objected.

“Trump expressed frustration over a bipartisan bill sanctioning Russia and tried to convince Senate Foreign Relations Chairman Bob Corker (R-TN) that it wasn’t good policy,” three people familiar with the call told Politico.  “Trump argued that the legislation was unconstitutional and said it would damage his presidency.”

Corker didn’t budge, and the bill easily passed. “He was clearly frustrated,” one person with knowledge of Trump’s call said to Politico.

If that wasn’t insulting enough, there’s a second piece of legislation working its way through congress that will protect special counsel Robert Mueller from being fired by the President.

As recently as July, rumors were swirling that the President would use the recess appointment loophole to replace Attorney General Jeff Sessions, and have the new AG fire Mueller.  Senate Majority Leader Mitch McConnell (R-KY) removed that possibility by keeping the Senate in session during the August recess – the same trick he used to prevent President Obama from making recess appointments.

But just to be sure, Senators Thom Tillis (R-NC) and Chris Coons (D-DE.) are preparing a bill specifically block the President from firing Mueller in some other way.  Trump called Sen. Tillis and his bill came up.  Confirmed by a “source briefed on the call,” Politico believes that “this the latest signal of the president’s impatience with GOP senators’ increasing declarations of independence from his White House. Trump was unhappy with the legislation and didn’t want it to pass, one person familiar with the call said.”

With Trump spending much of the last month attacking congressional Republicans, and Republicans, in turn, defying him on everything from his handling of Charlottesville to Russia, the two are clearly on a collision course.  And neither side appears to be backing down.

None of this bodes well for the Republican congressional agenda.  With a budget bill, tax reform, and the debt ceiling all on the docket when congress gavels back into session in September, there’s little time for petty politics with a president from their own party.  But with Trump pushing a competing agenda that prioritizes the border wall and killing the Russia investigations, it’s difficult to see this ending well.