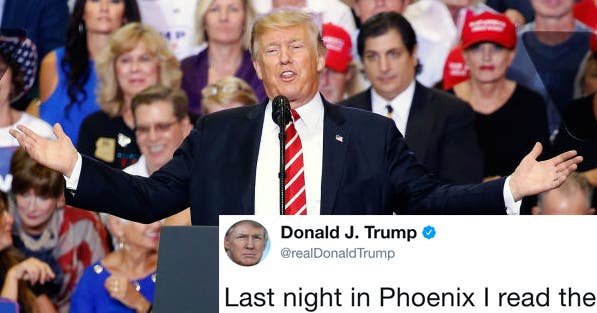 Last night, in a despotic, authoritarian style rally, the President of the United States blasted his critics, defended his remarks condoning white supremacist violence, and incited anti-First Amendment rage among his base.

While the scene was arguably a new low for the presidency, President Trump did make one attempt to rise above the fray.

In lampooning Arizona’s Republican senators — John McCain, who was the 51st and deciding vote against repealing Obamacare, and Jeff Flake, who has voted with Trump but criticized him — Trump said, “They all said, ‘Mr. President, your speech was so good last night, please, please Mr. President, don’t mention any names.’ So I won’t. I won’t… One vote away [alluding to McCain’s healthcare saving vote] — I will not mention any names. Very presidential, isn’t it?”

The bar Trump set for himself was as low as any in the history of his office, and yet, it was still a bar.

Fast forward less than ten hours and our impulsive Commander-in-Chief failed to muster even the self-control of a newly housebroken puppy to stick to his pathetic vow:

Phoenix crowd last night was amazing – a packed house. I love the Great State of Arizona. Not a fan of Jeff Flake, weak on crime & border!

In attacking Flake, Trump proved that he cannot be trusted to even keep the promises no one is asking for. In bragging about a crowd that was by most accounts half-full at best, Trump reminds us that he is willing to look us in the eye and tell us the sky is green if it gives his ego the slightest stroke.

Trump’s next tweet however hits on an important truth. We have watched Trump’s disturbing actions and heard horrifying his words. Yes, Mr. President, we definitely got it.

Last night in Phoenix I read the things from my statements on Charlottesville that the Fake News Media didn't cover fairly. People got it!