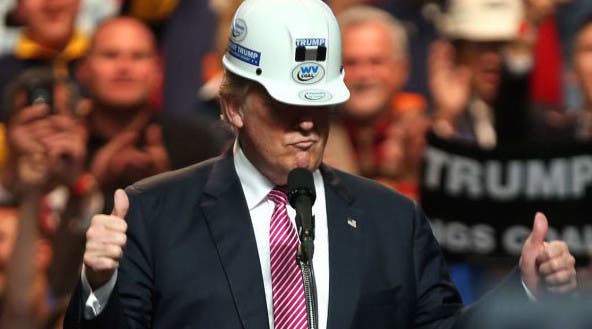 At his latest self-serving campaign-style rally in Phoenix, Arizona yesterday, Trump made several remarks about clean coal that seem to prove his tenuous grasp on the subject.

Trump’s misguided remarks suggest that the President, who has been a staunch advocate for the fossil fuel since his campaign, may actually believe that “clean coal” comes from physically cleaning it. With soap. And a brush.

Reality, as is often the case with Trump, does not lend itself to that theory.

The concept of “clean coal,” in fact, is tenuous at best. The term as it stands was simply born out of a $40 million campaign by the American Council for Clean Coal Electricity in 2008 to peddle the idea of a green alternative to standard coal. Per Vice News:

[If] clean coal worked at all, it would, in theory, work by either turning solid coal into a gas by applying heat and pressure, in a steamy, oxygen-rich environment or by trying to trap carbon from power plant exhaust.

Either way, though, the technology is still underdeveloped and ineffective, at least for now. Even the Department of Energy’s website concedes that “these technologies are not ready for widespread deployment on fossil fuel based power plants.”

While shameful, it is not surprising that Trump has such a precarious understanding of a technology that essentially makes up the cornerstone of his energy policy. Perhaps it would benefit the President of the United States to take some time to be briefed on the positions he espouses; at the very least, he wouldn’t humiliate himself with every unfortunate, baseless diatribe that he drivels on about.